After our move here, I was pretty spent. It has been nearly two months and in that time, I have been feeling  an overwhelming lack of motivation to do anything even slightly domestic. The laundry was piled sky high and the kids were obviously hungry but still I couldn't bring myself to cook or bake. They ate lots of toast and fruit, cereal, cheese and crackers and yogurt...It's intense being a full-time mama, trying to get settled, unpacked and sorted while managing a small business and a farm and feeling completely exhausted and just wanting a bit of quiet and stillness but never, ever finding it. But then all of a sudden, something lifted and just like that, I woke up a few mornings ago and I was actually awake, finally. When that happened, I made chicken noodle soup, butternut squash soup, two loaves of corn bread, and an apple crisp. Everyone was happy about that. The chicken soup came from our own free-range hens, the corn bread from our heirloom red flint corn, and the butternut squash soup from our own gardens (: 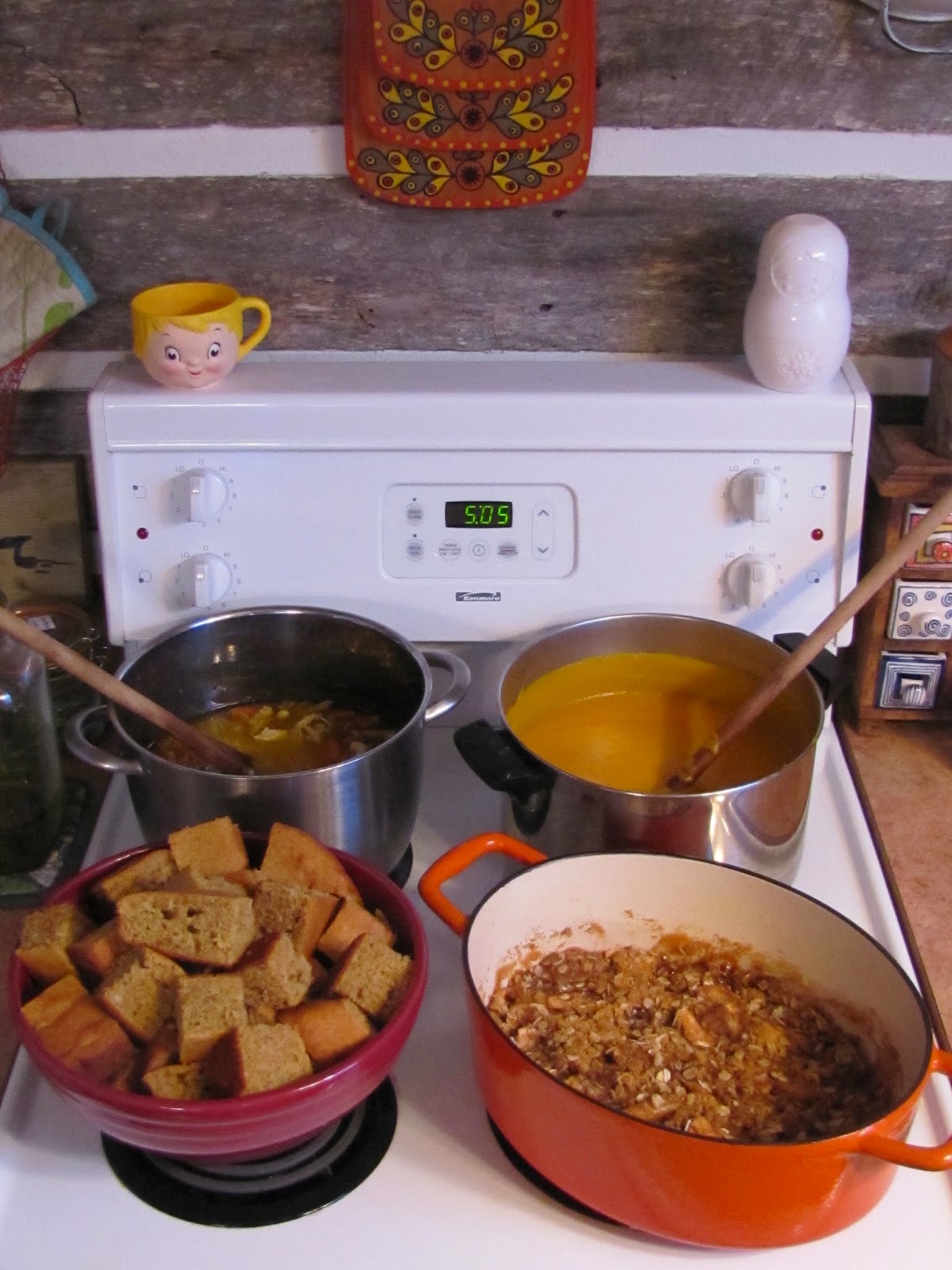 We have been eating the corn bread with Jason's yummy homemade strawberry jam, pairing it with soup. 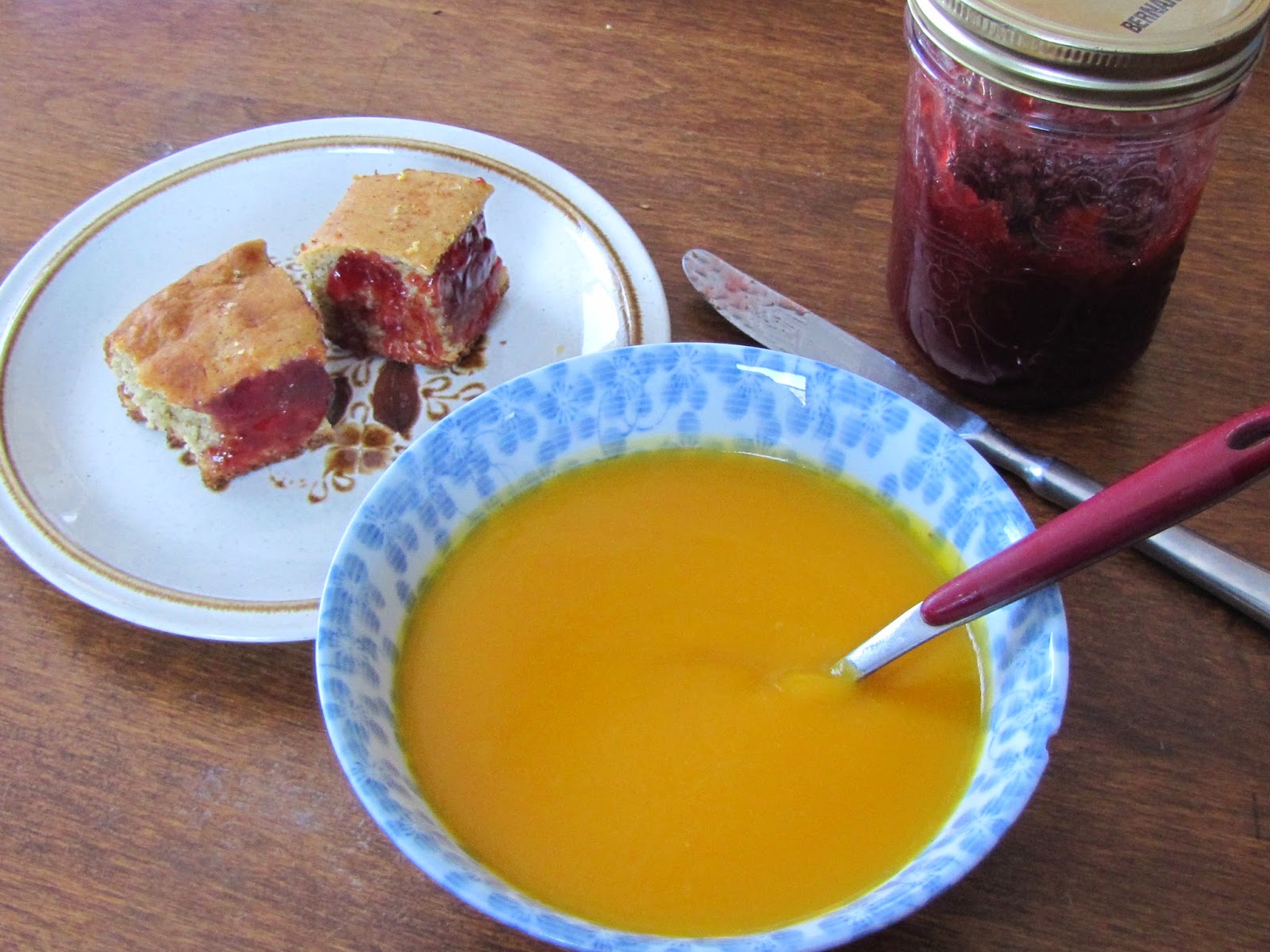 And for a totally naughty-but-worth-it lunch, french fries. So good. We ran out of the delicious potatoes we grew last summer but these were still yummy. 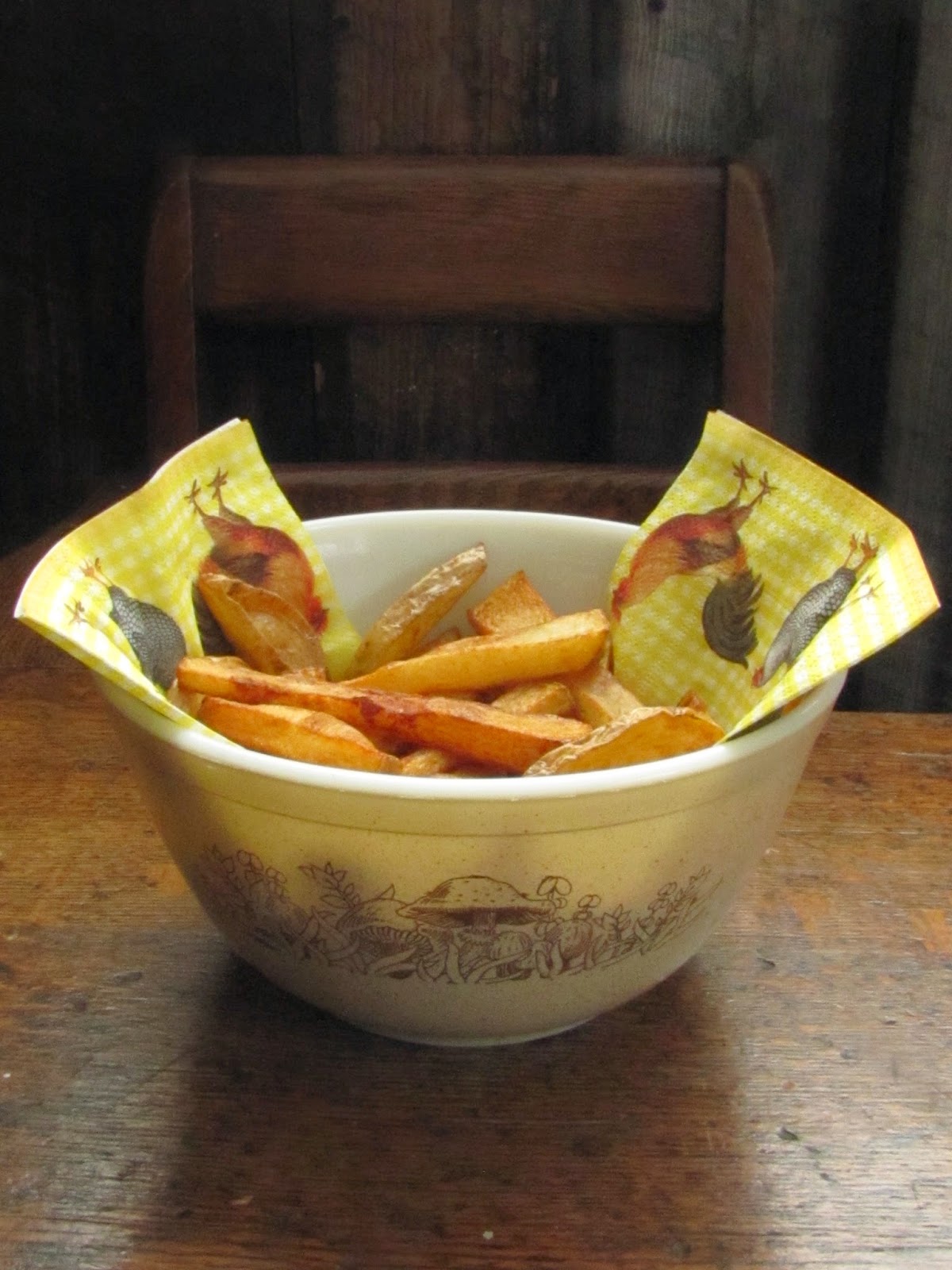 This is breakfast. Every morning we all have a bowl of oatmeal with honey and tea. Lately echinacea has made it's annual appearance as sore throats and little coughs announce themselves. Jason and I add ground flax to our oatmeal, and Ollie and I love diced apples. 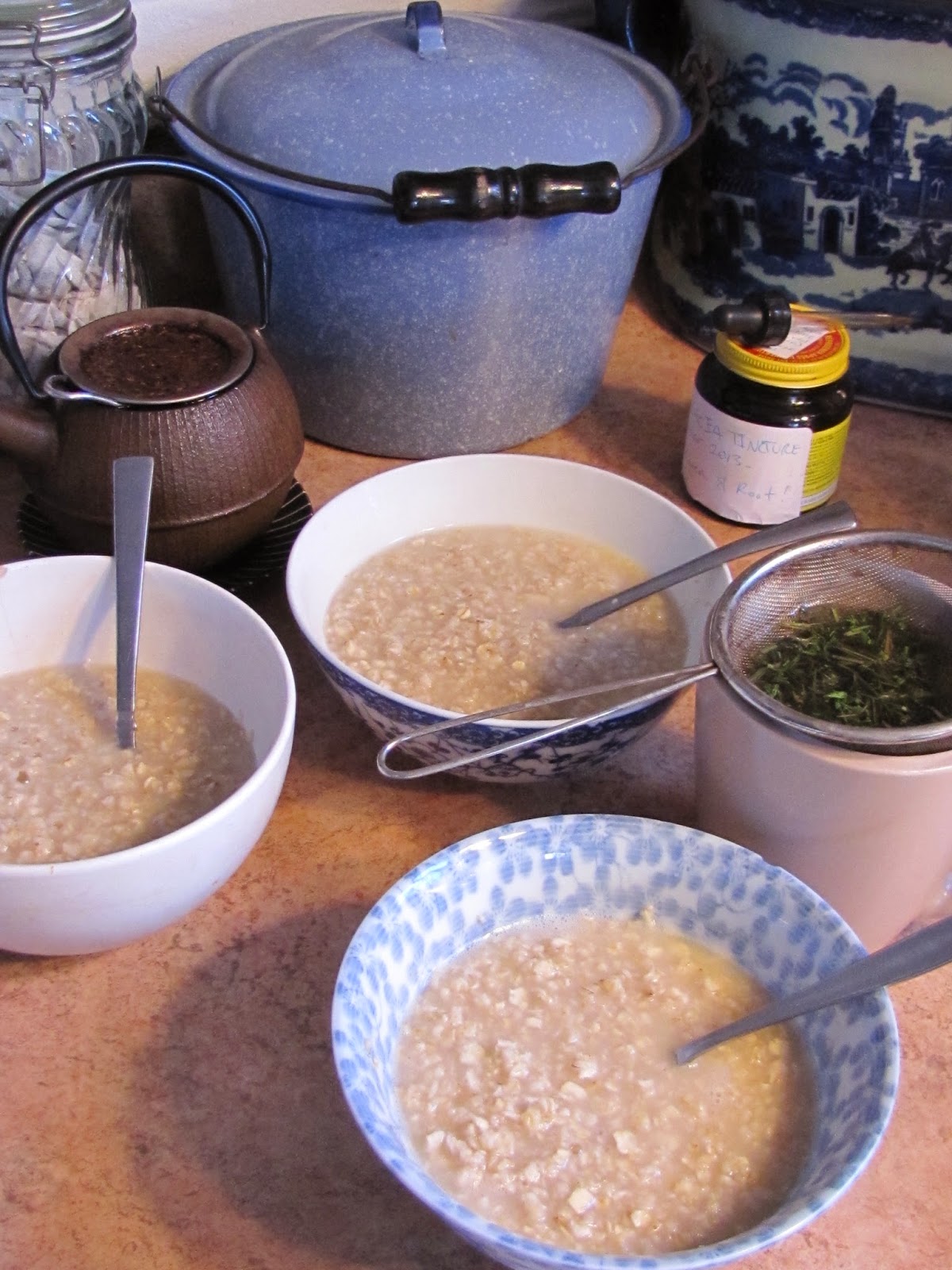 And for dinner tonight..probably french fries again, and salad (-;

Posted by Samantha Tara at 12:03 PM No comments: 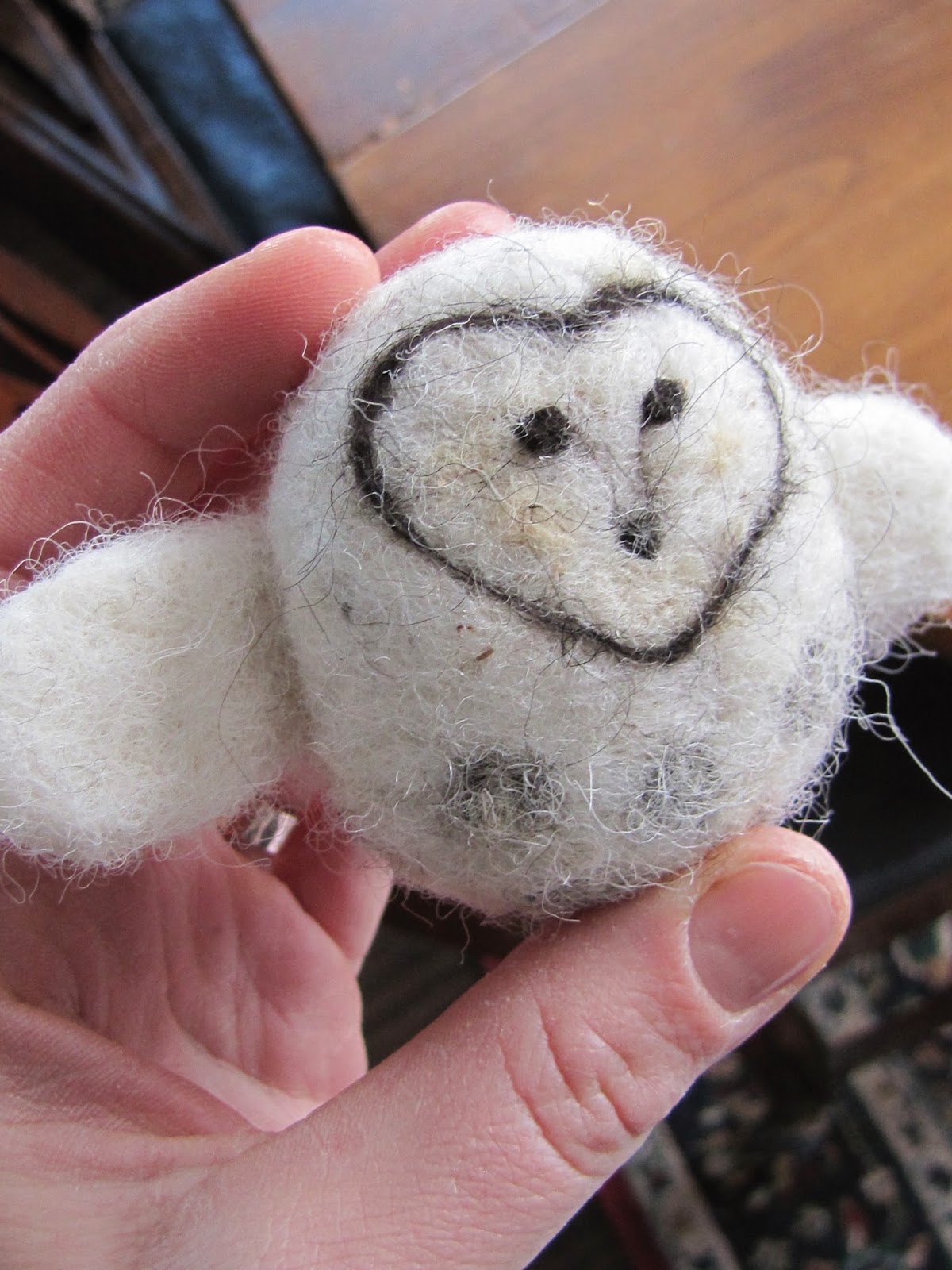 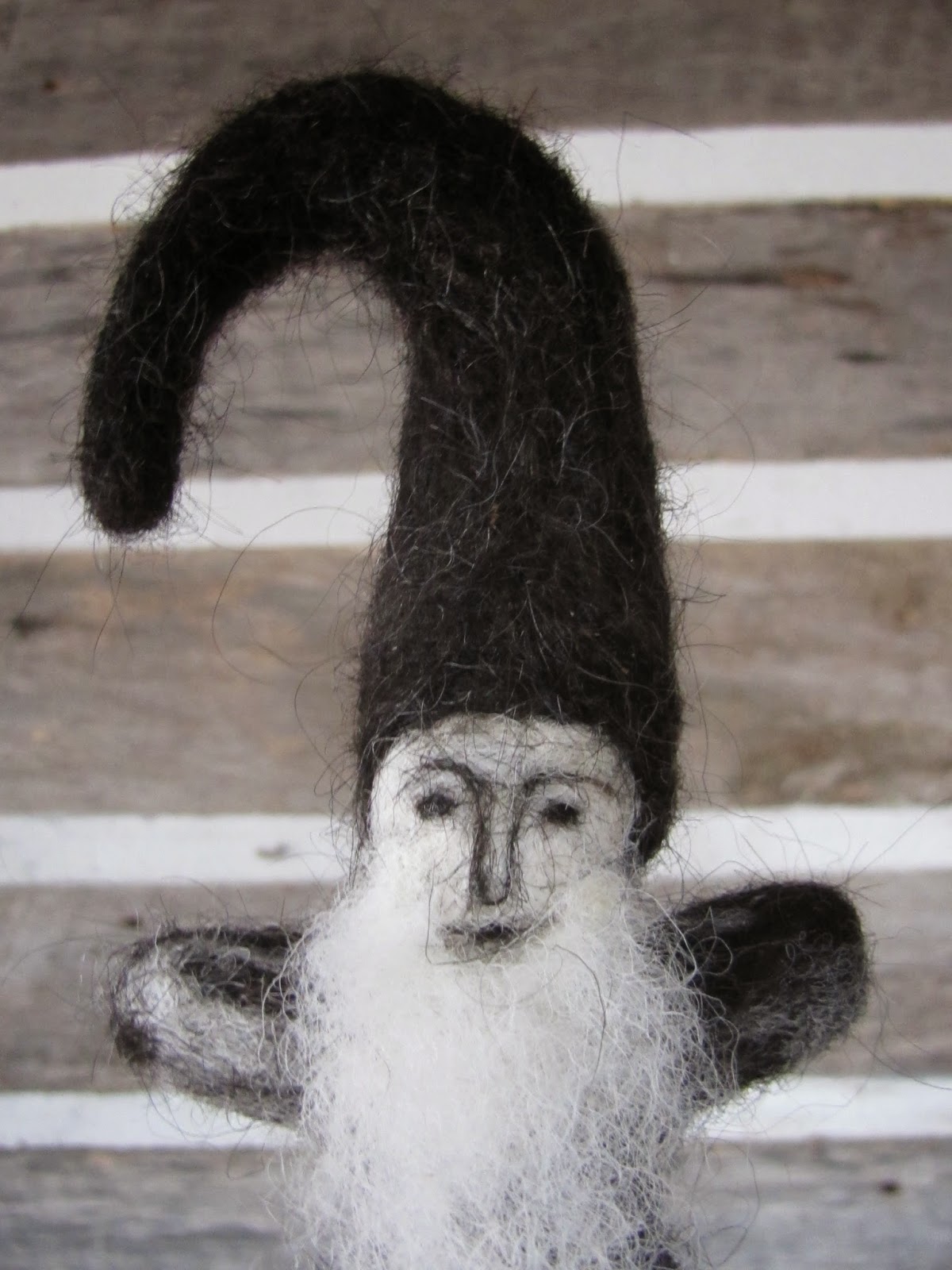 I tried needle felting for the very first time yesterday!

I used some washed wool from Teapot and Magpie and made a little barn owl for Jude and a gnome for Ollie. I had no idea it was so fun and I am thinking I may become obsessed! It is such a cathartic practice, manipulating this soft, beautiful fiber, and made even more special to me knowing that I am using the wool from my very own sheep (:

Making a lovely pot o' tea when the power goes out! 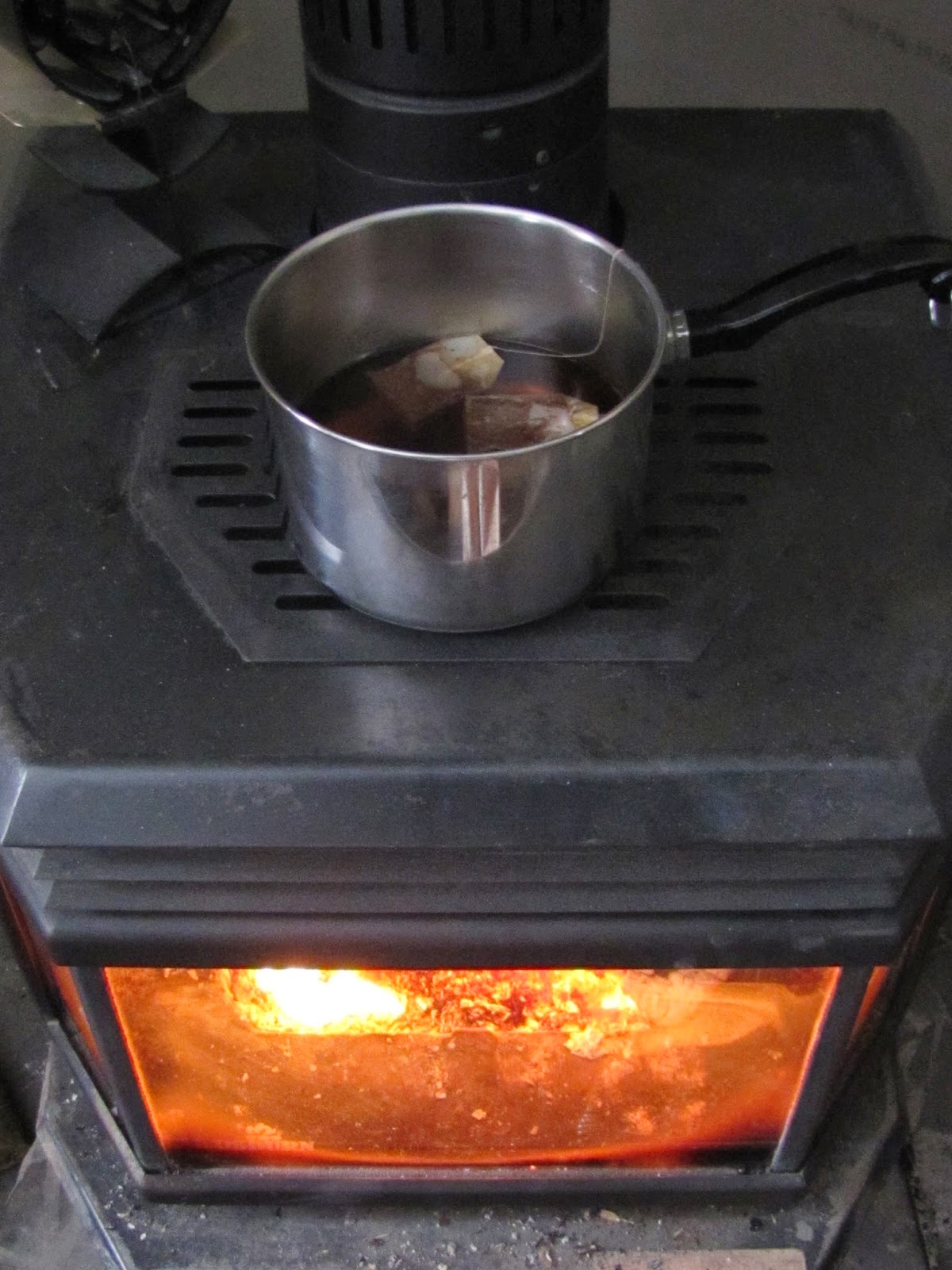 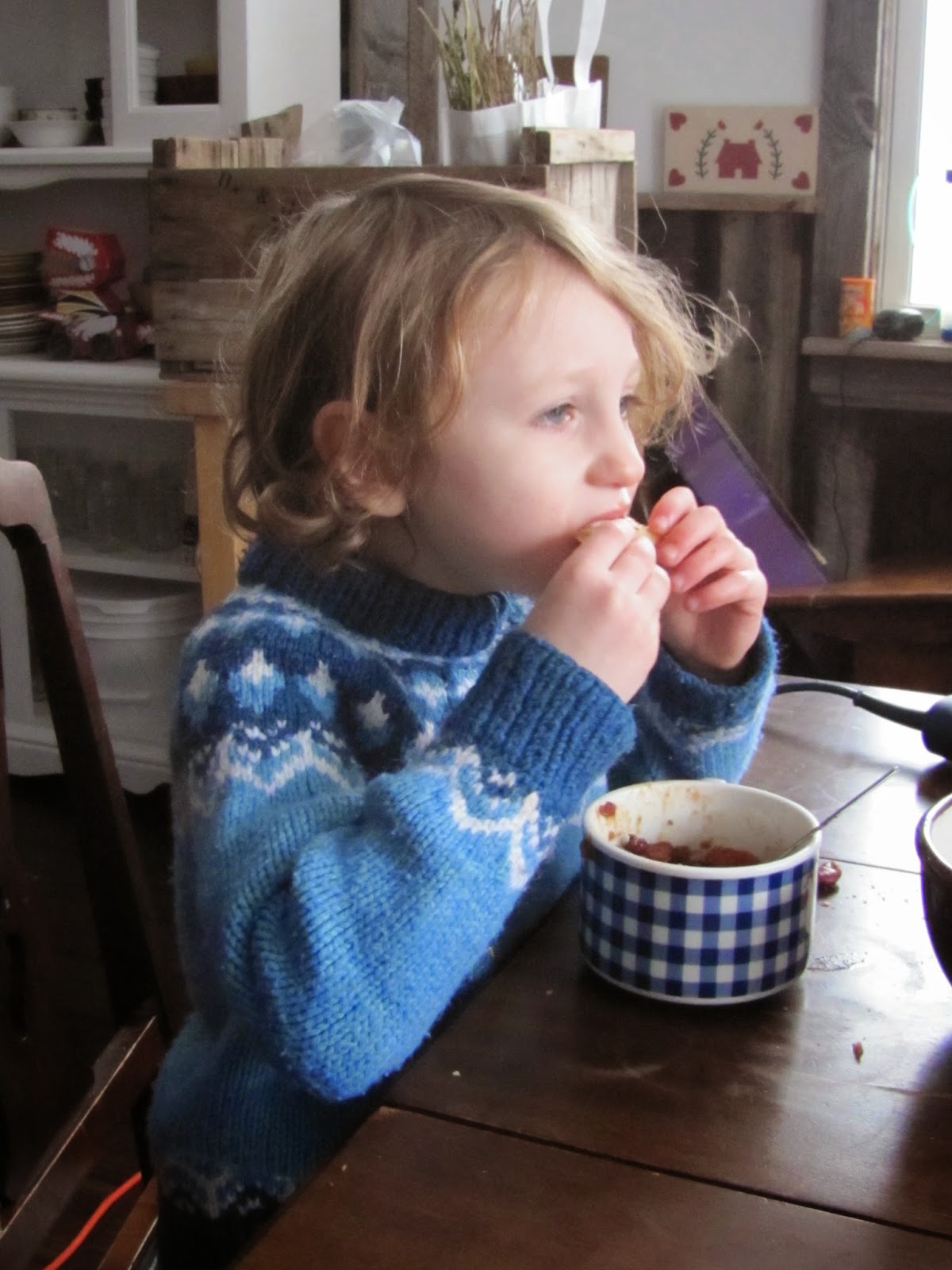 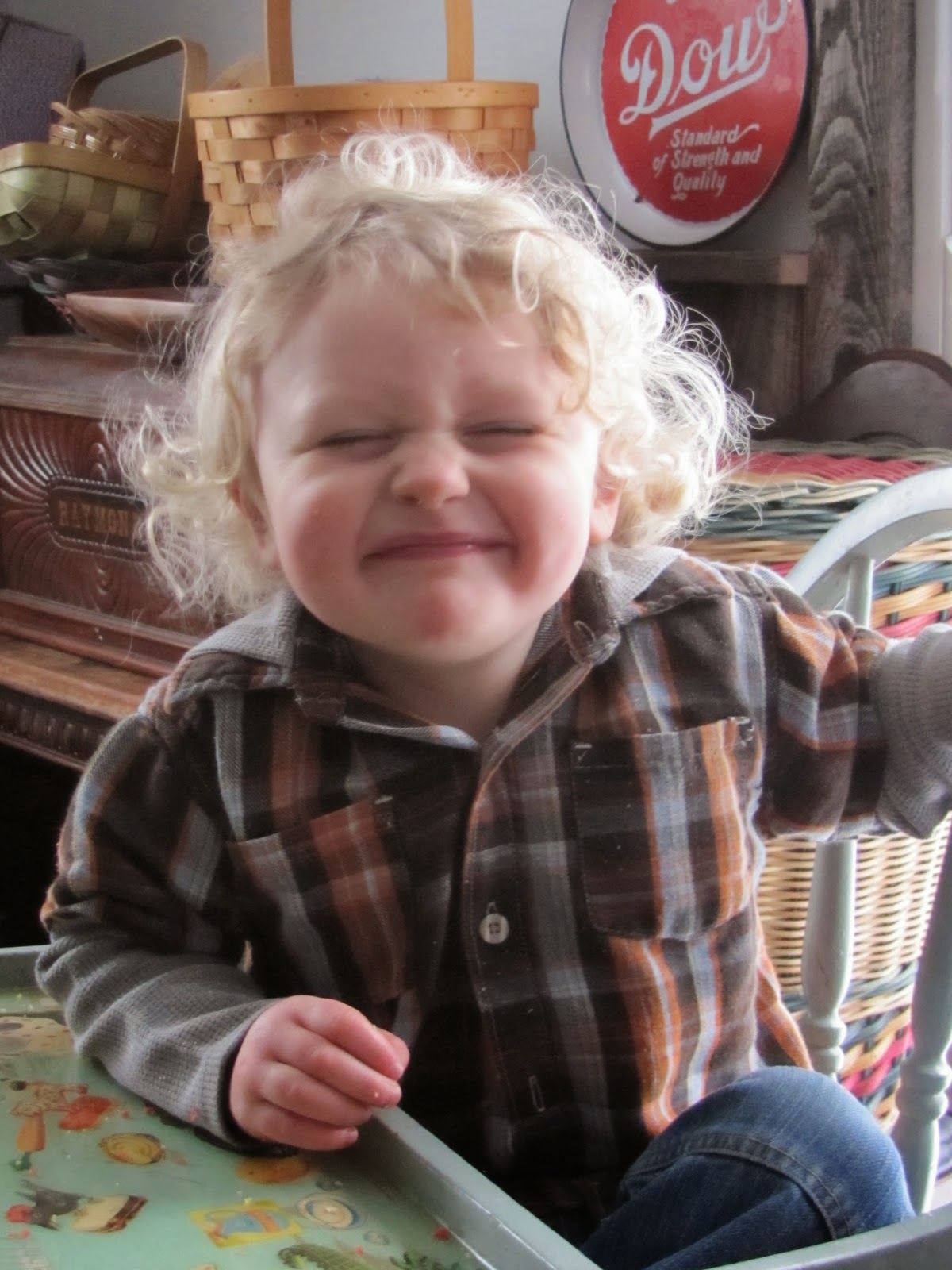 Posted by Samantha Tara at 8:39 AM No comments: 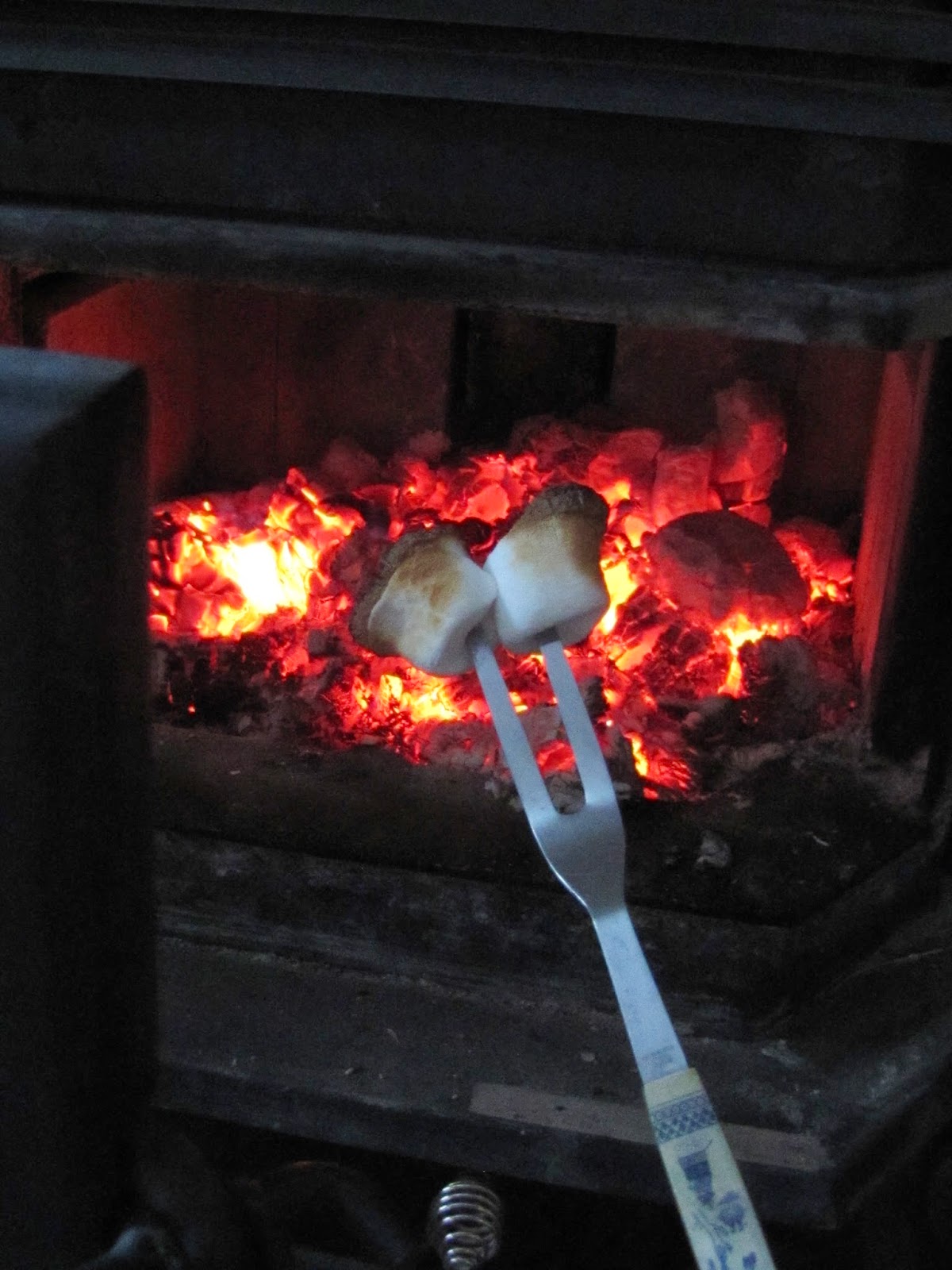 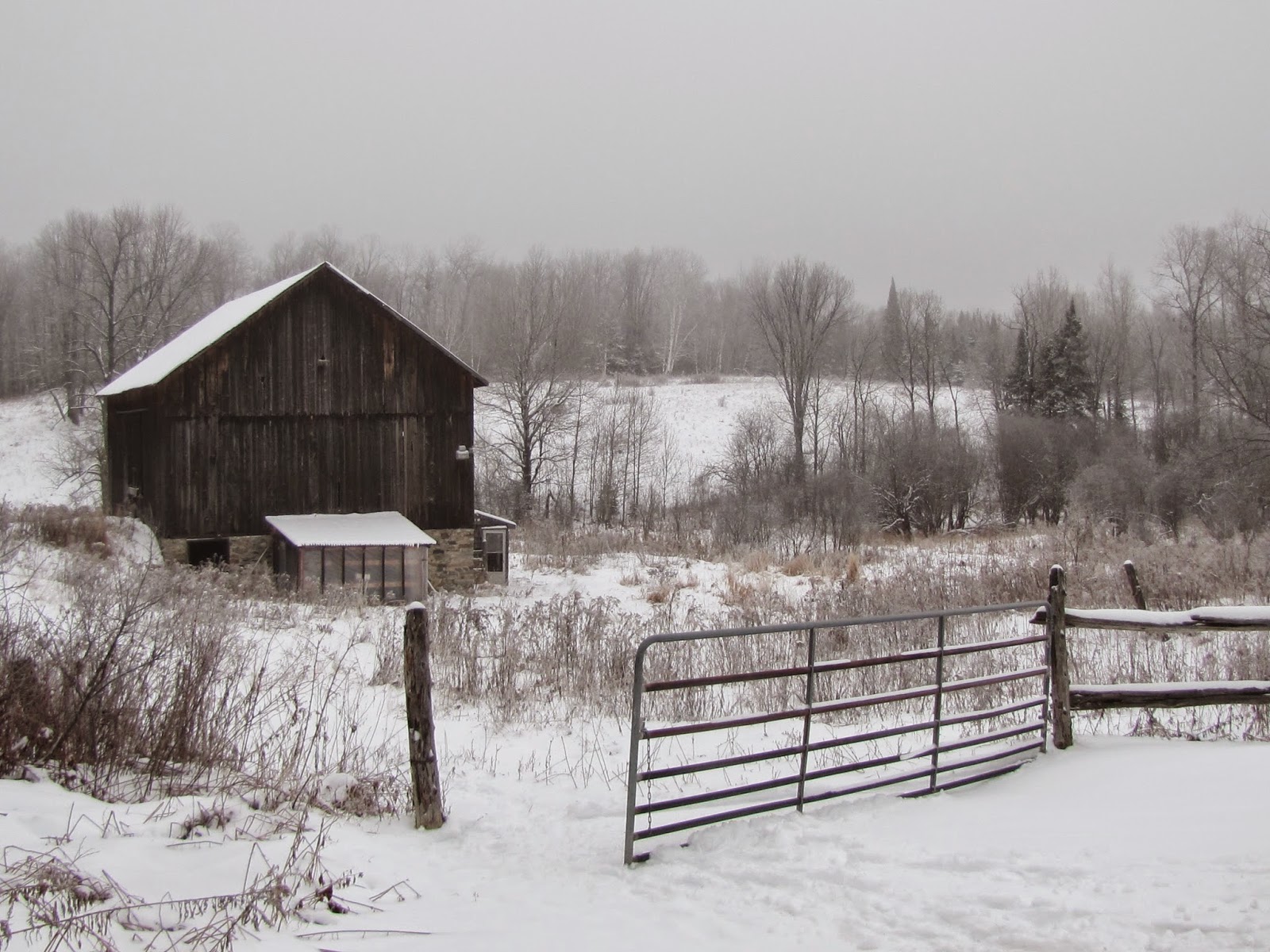 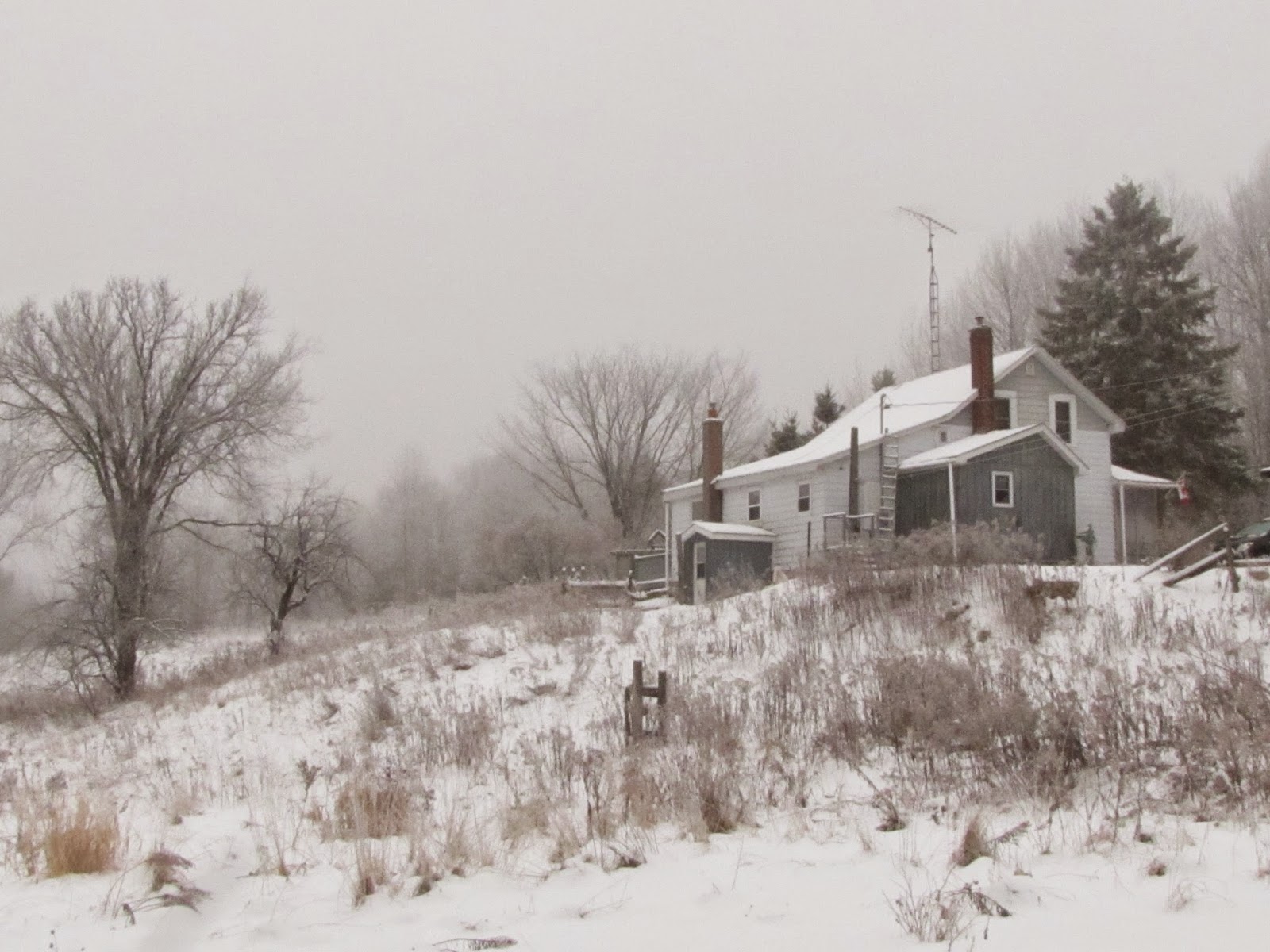 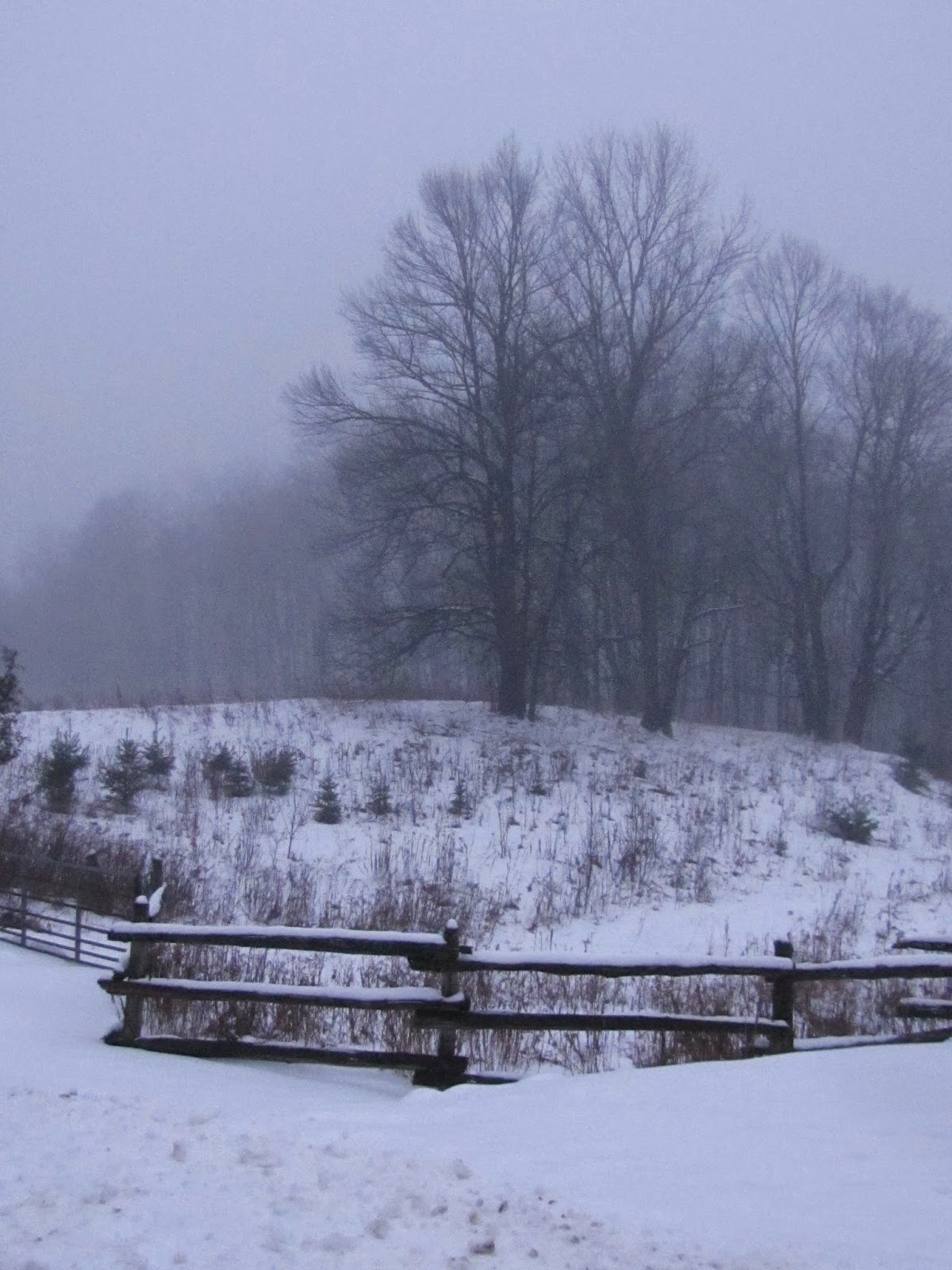 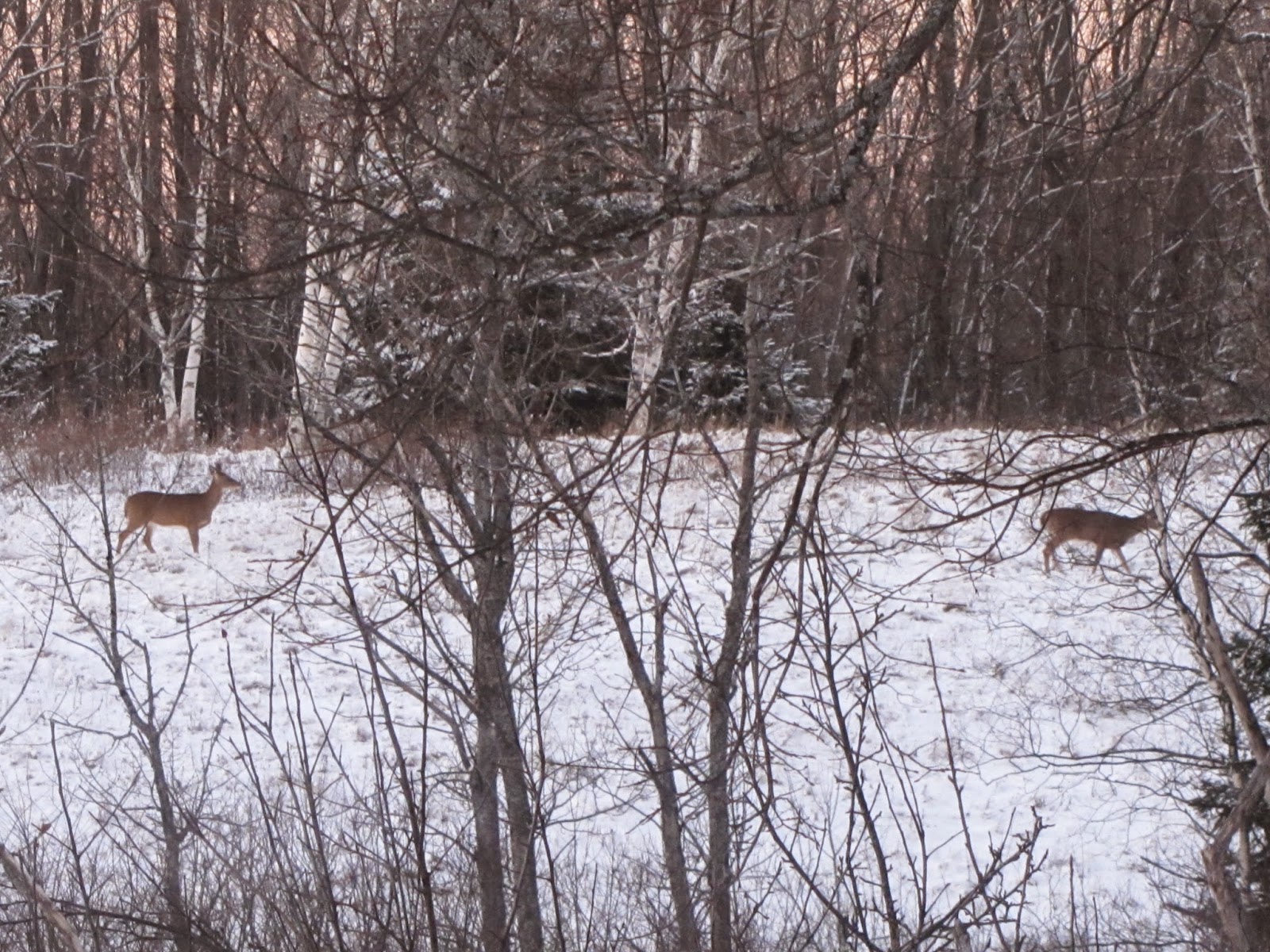 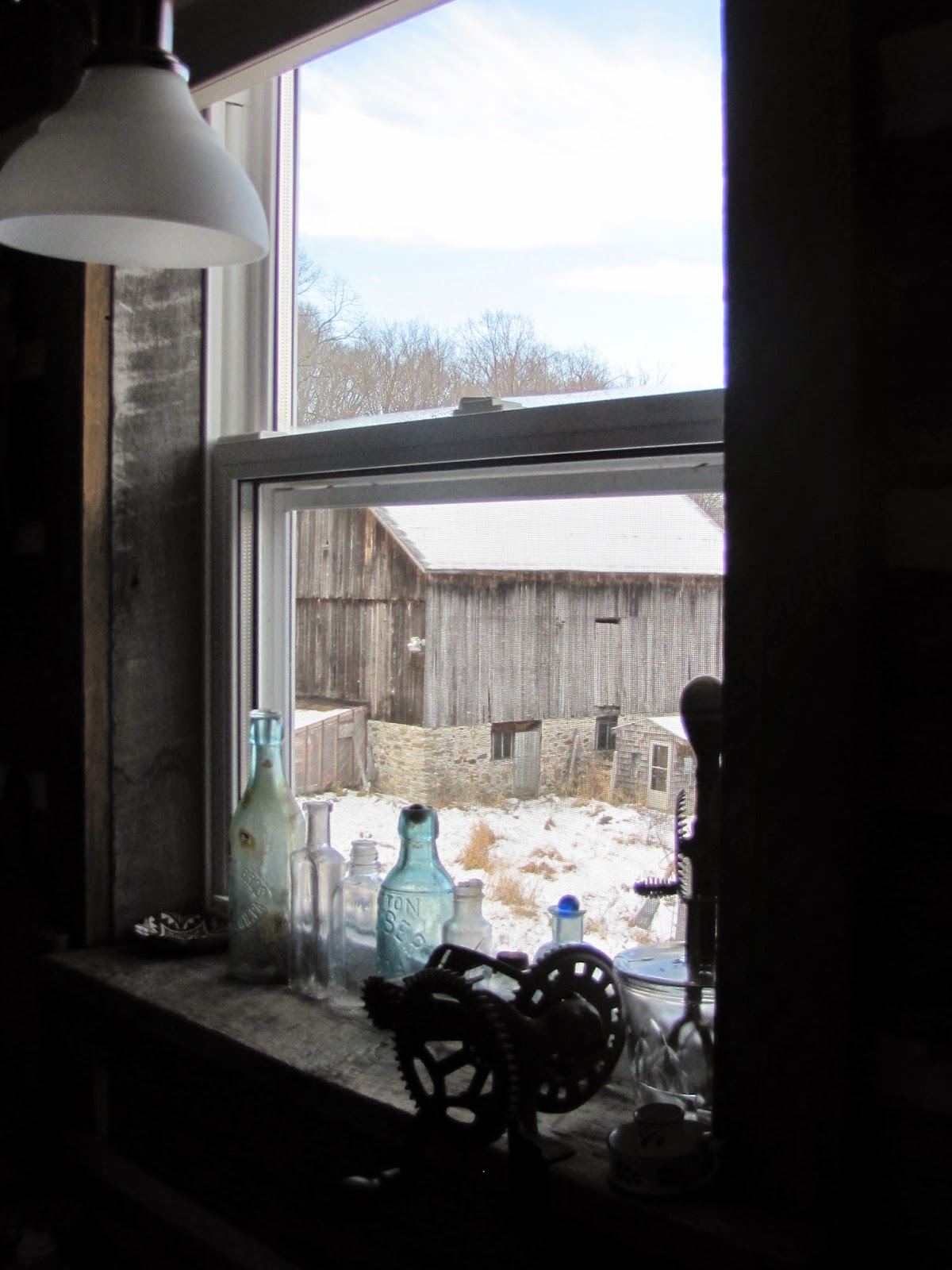 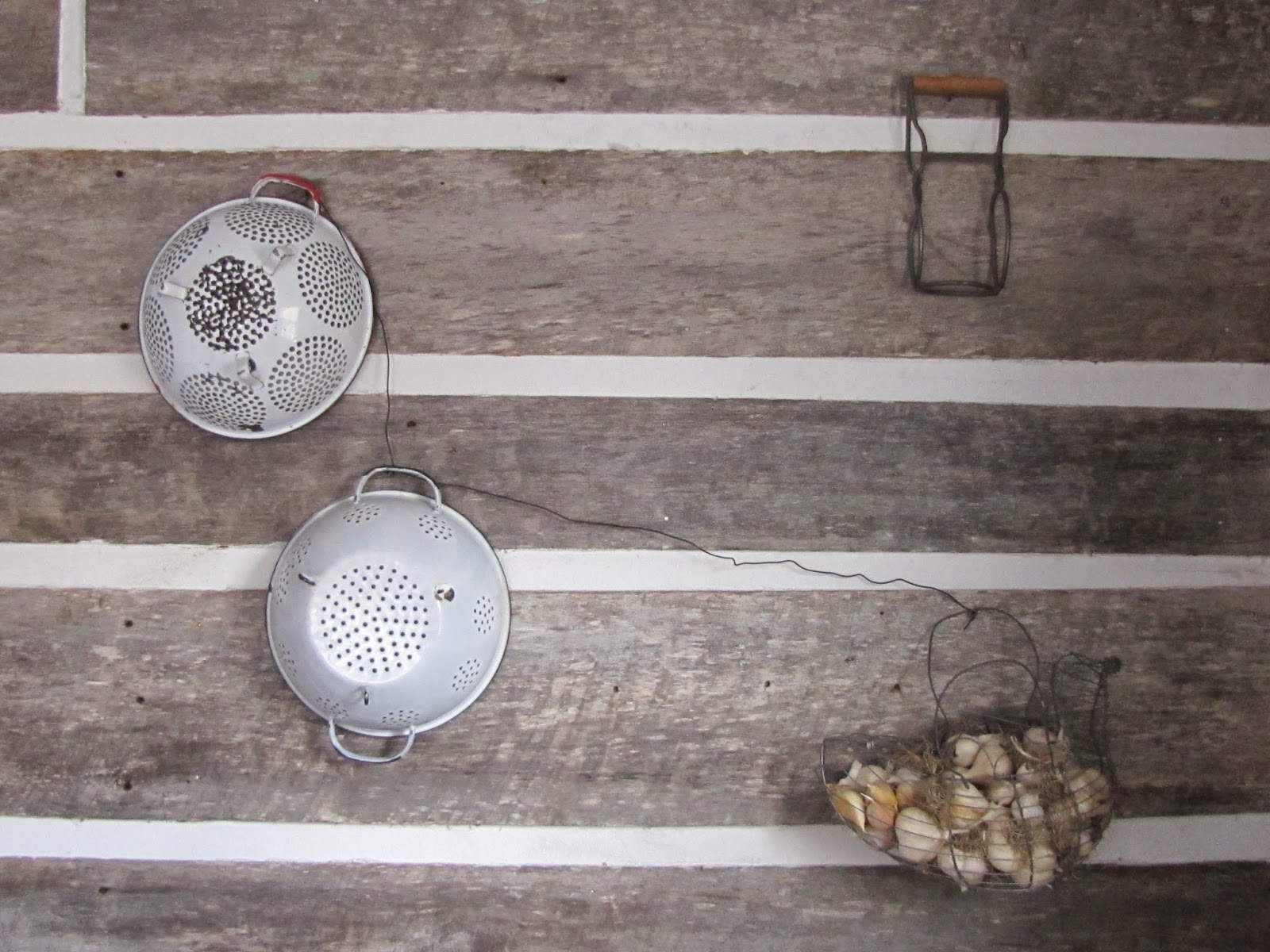 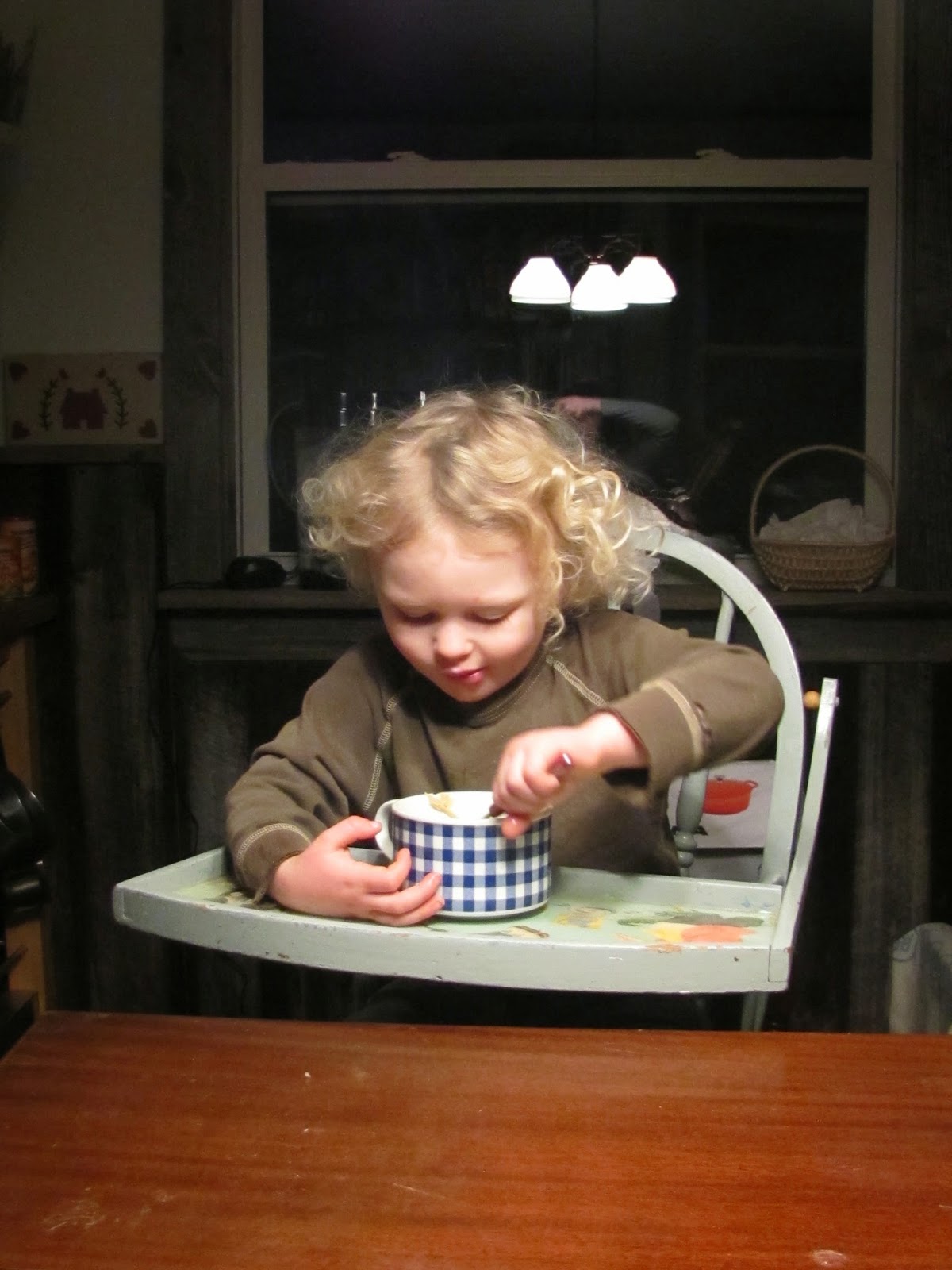 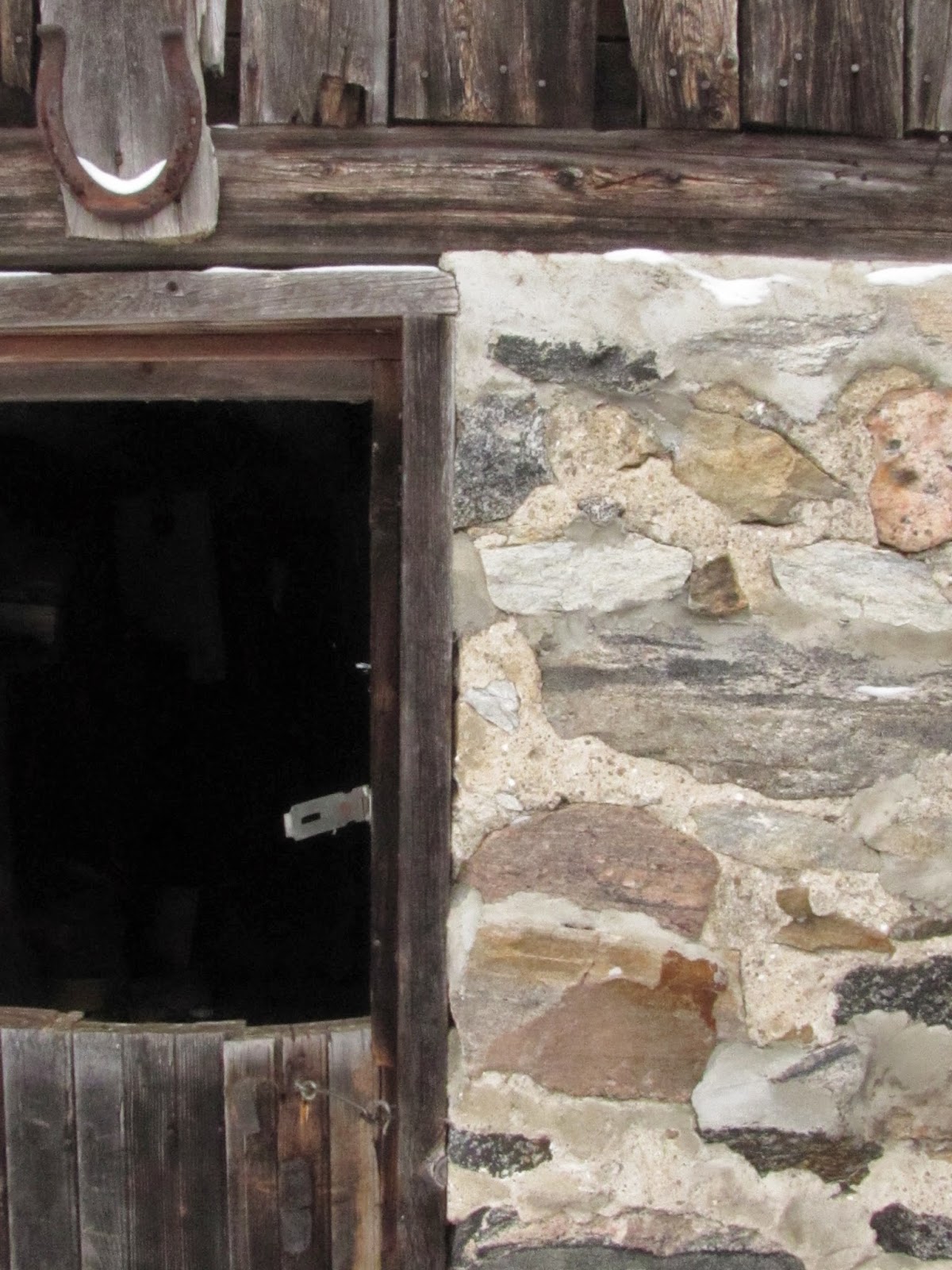 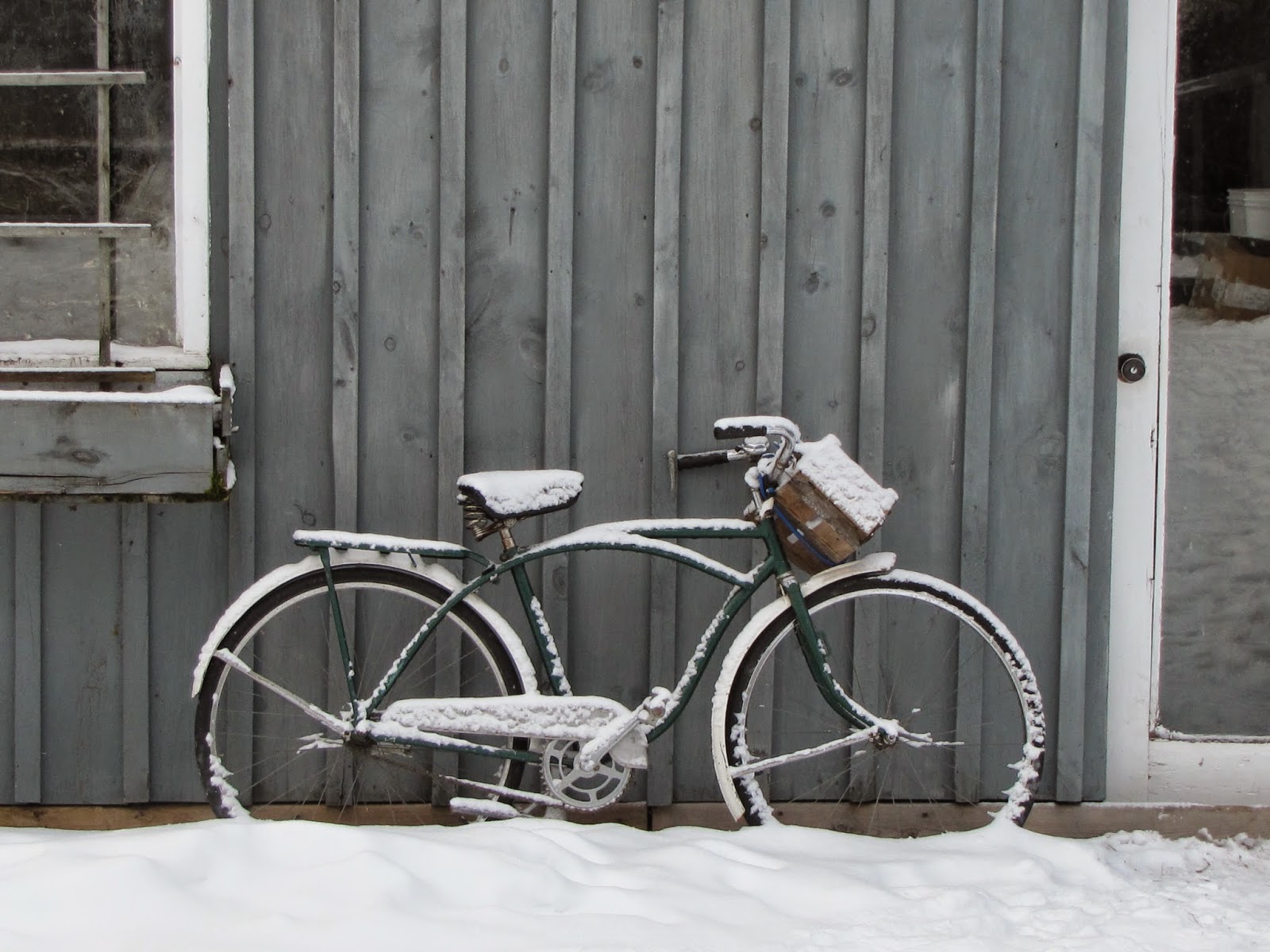 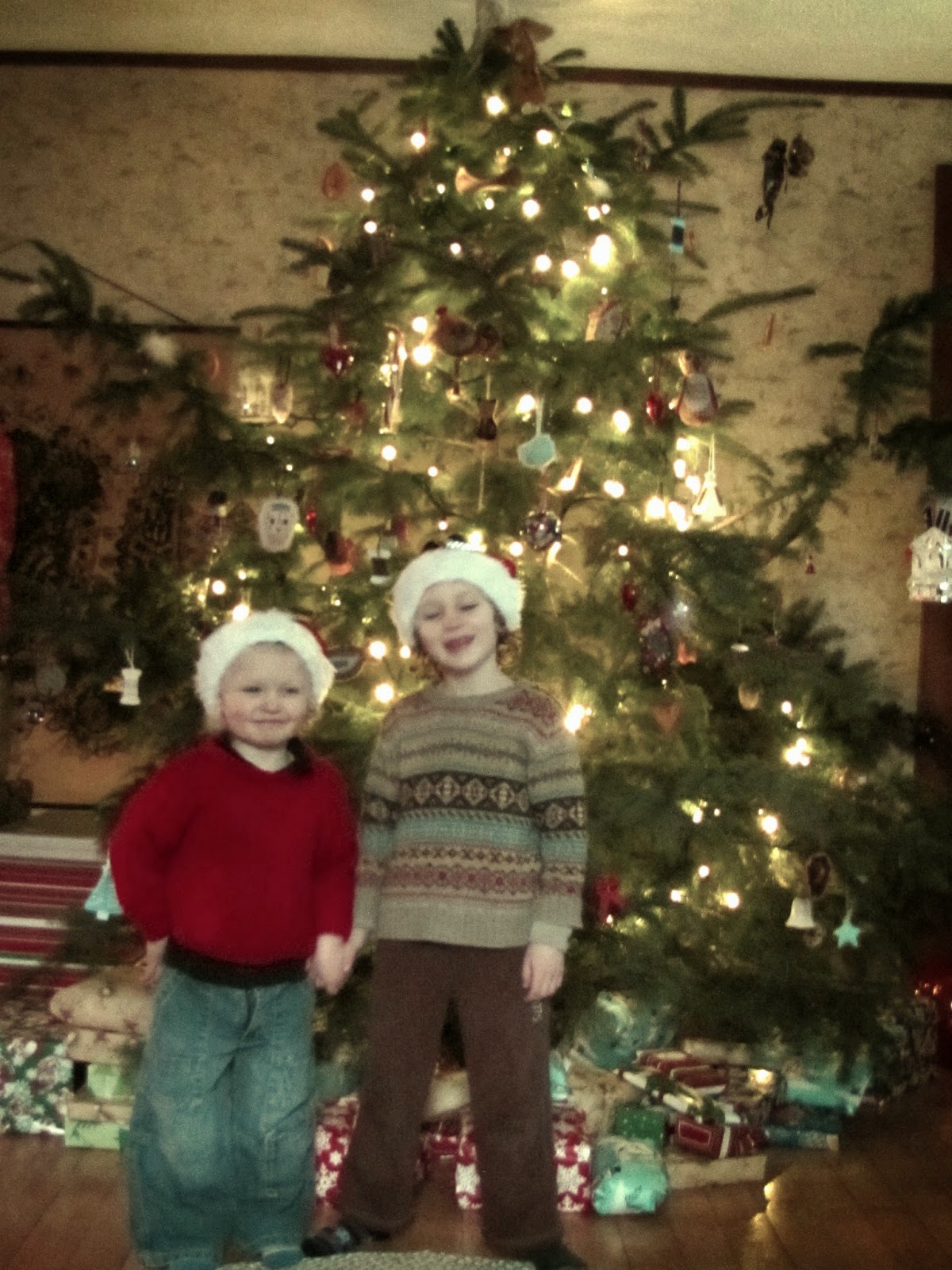 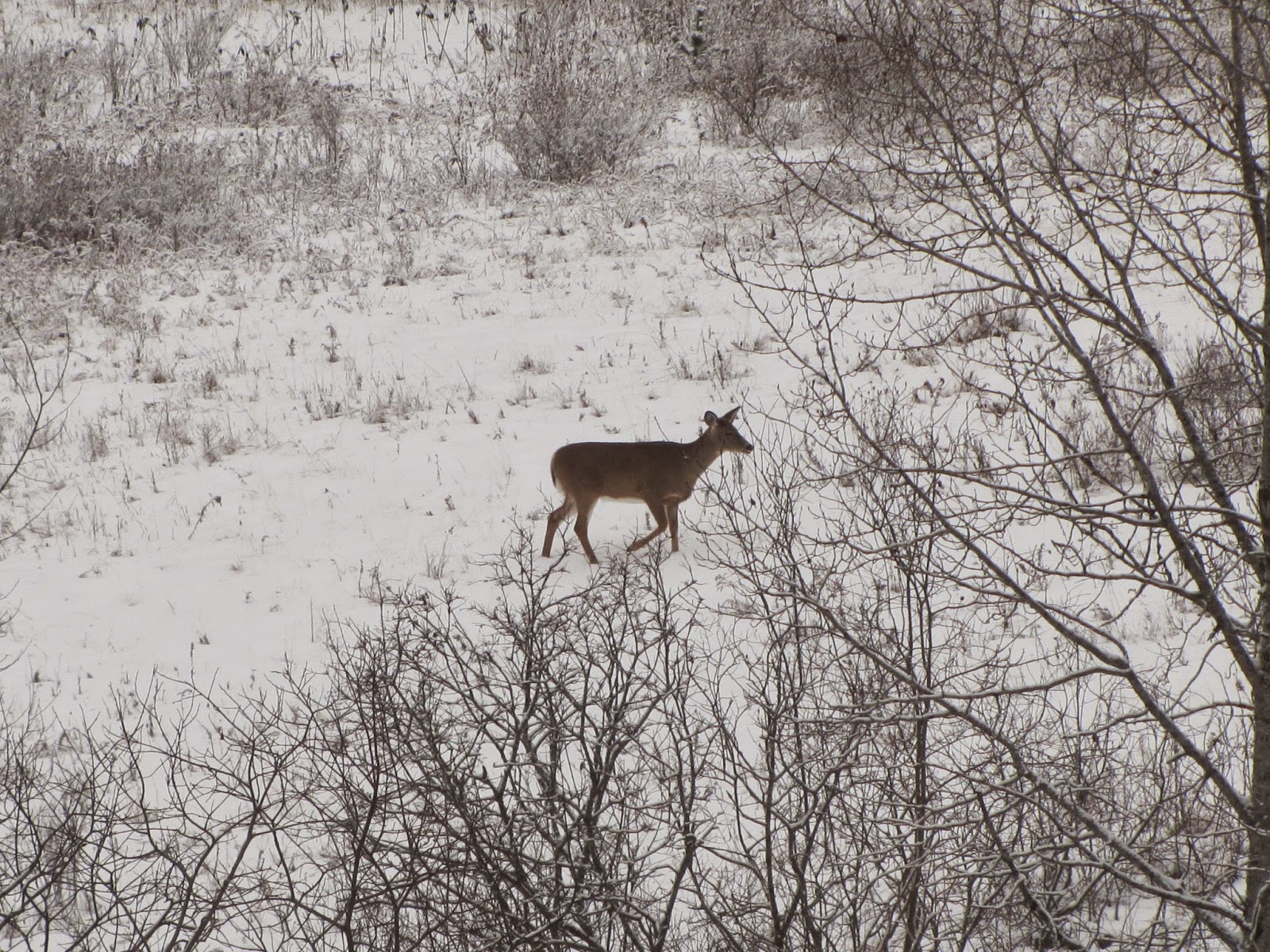 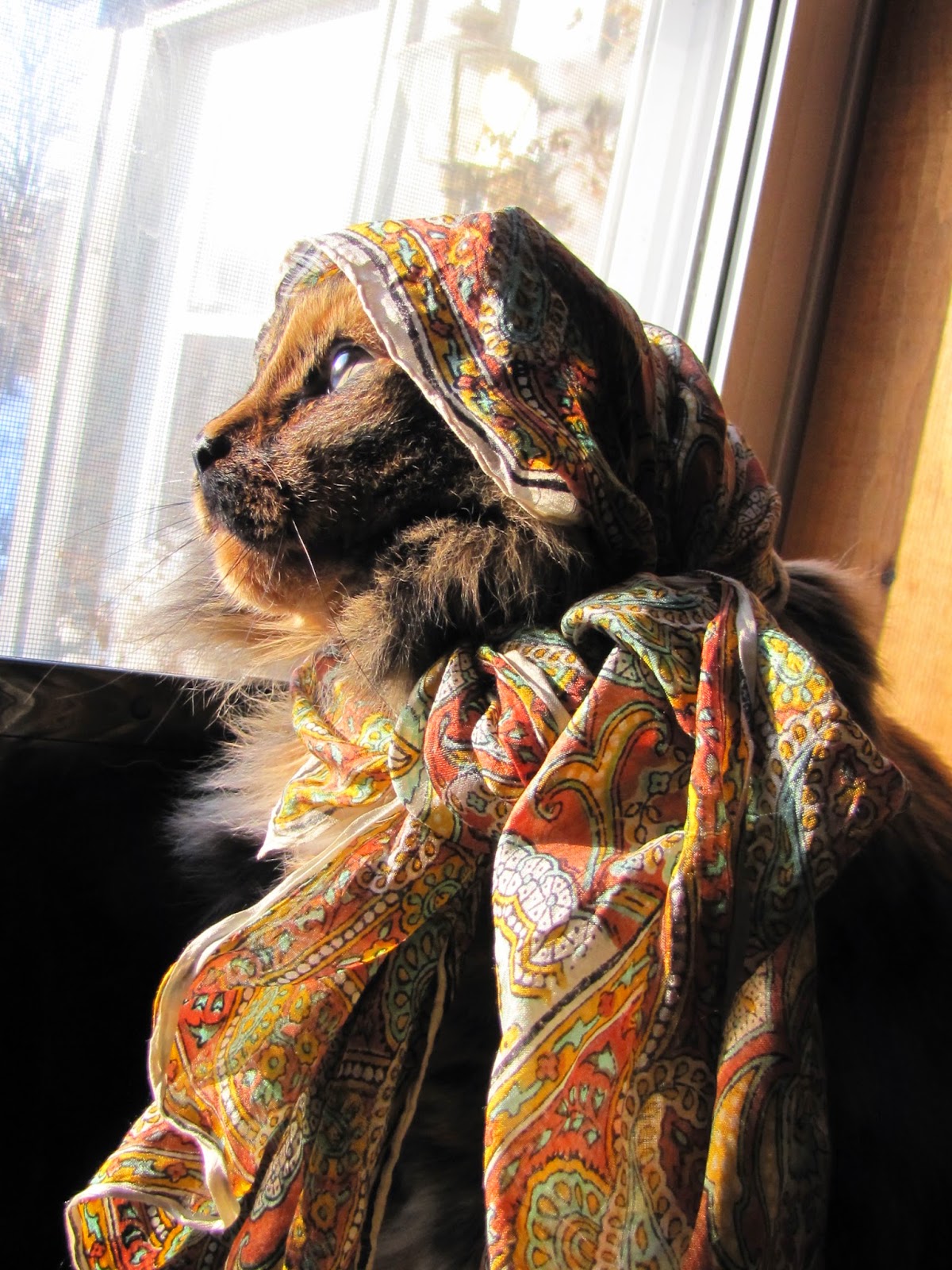 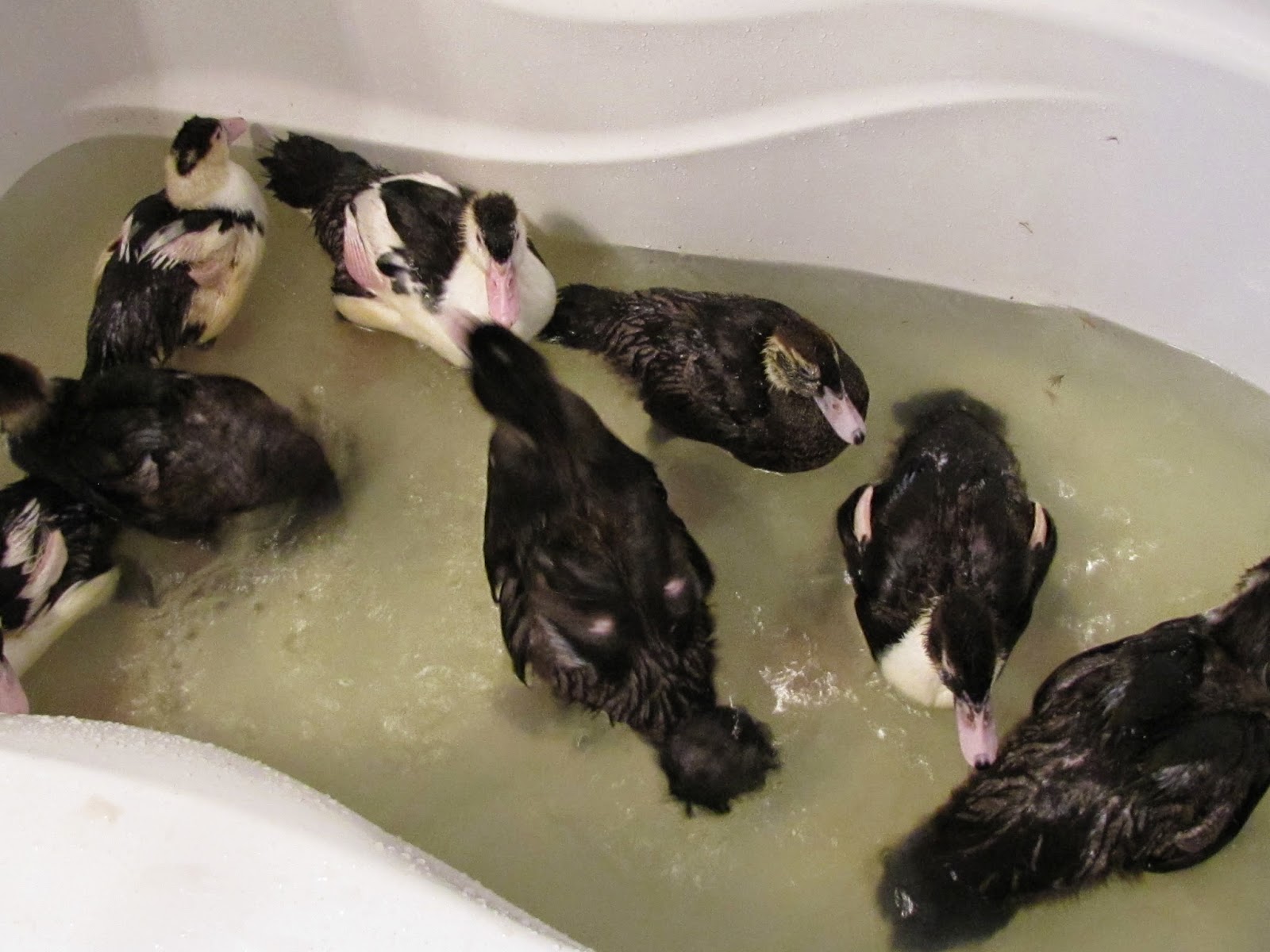 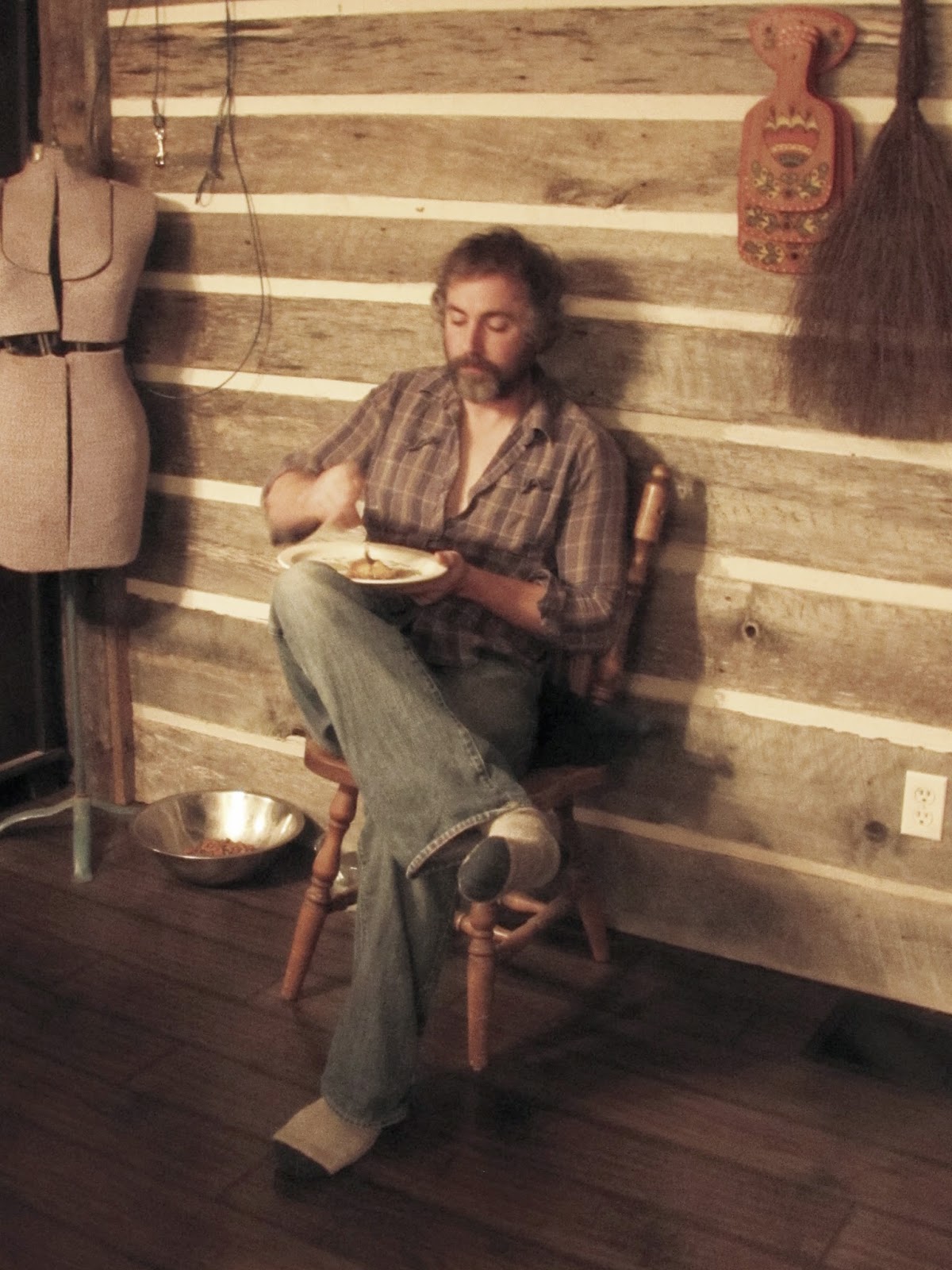 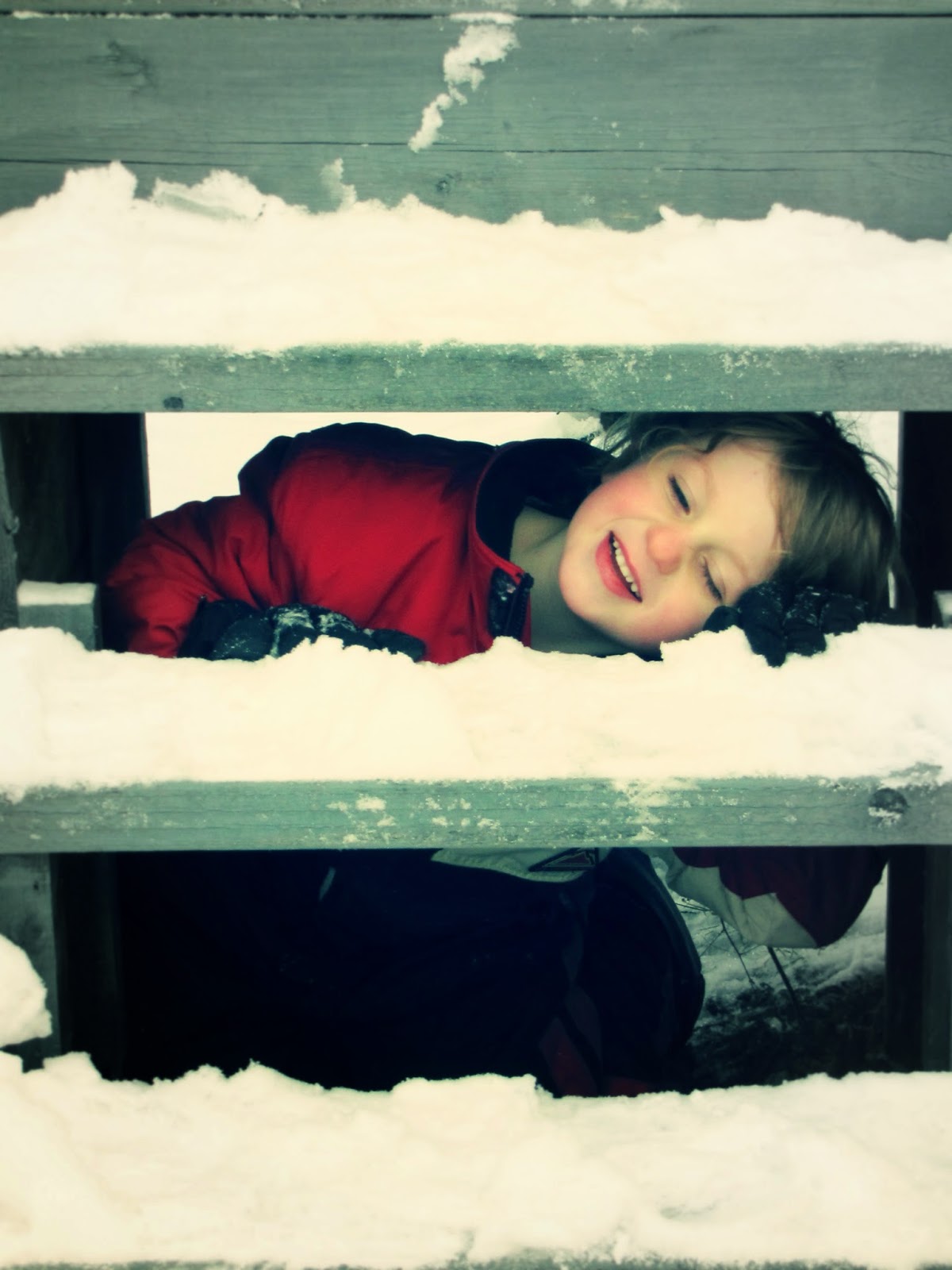 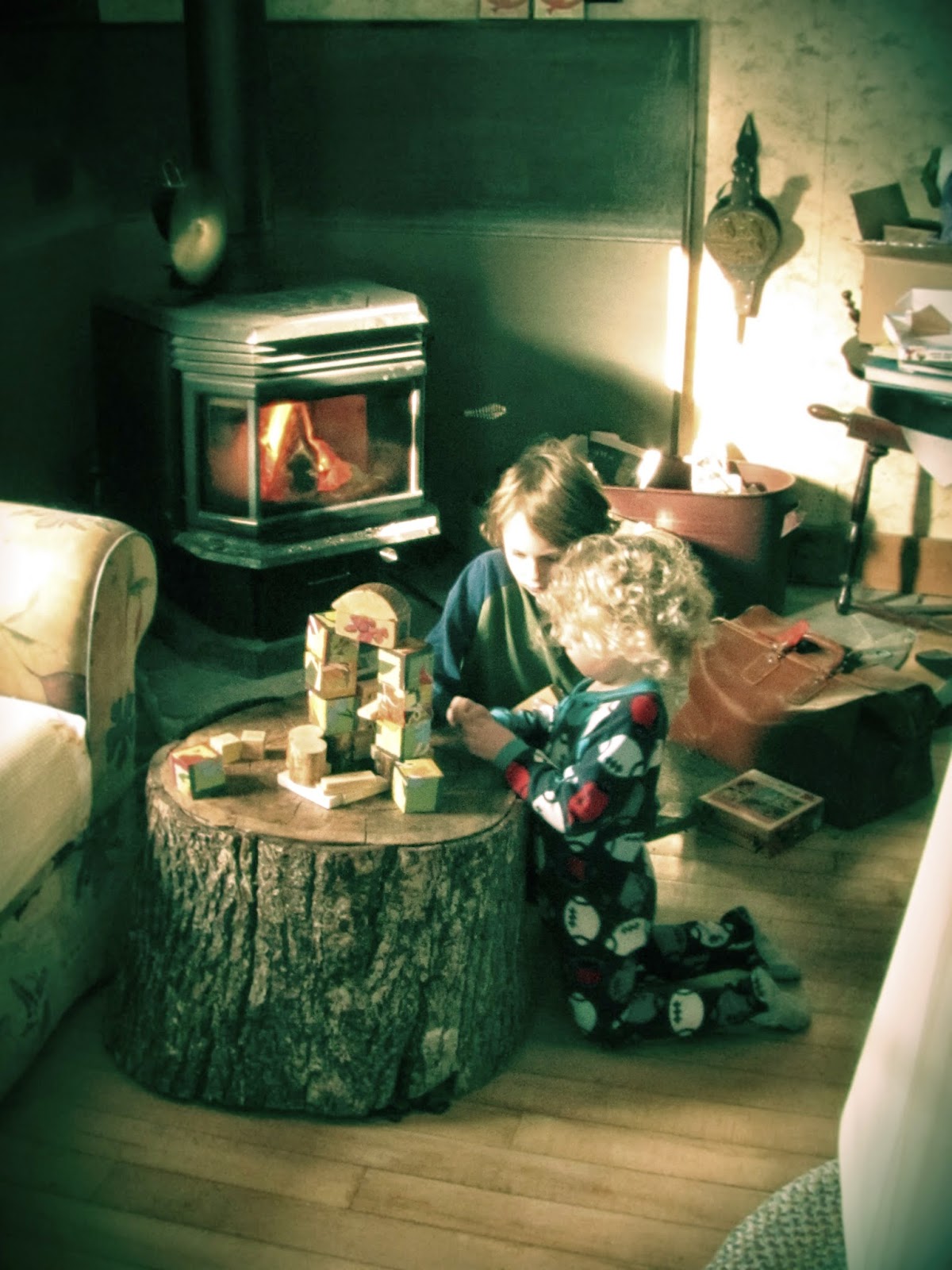 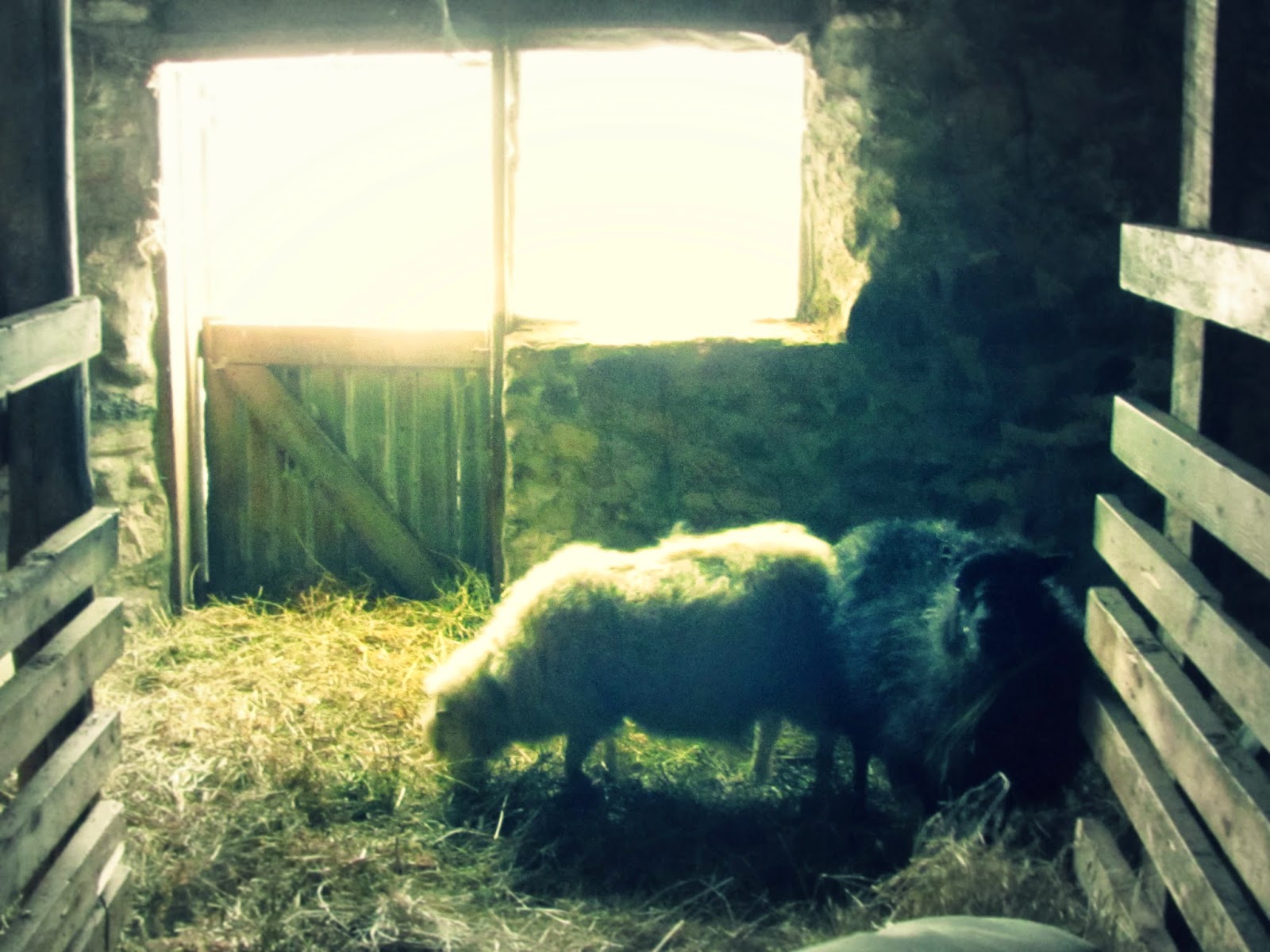 The past month has been very, very full, of newness and change and everything in between.
On December first, we woke up for the very first time in our new home.
It took three (very intense, grueling, emotional, exhausting) days to do the actual 'moving'. We rented a 24 foot truck for a couple days, and had four bush cords of firewood to transport, so we took that in our first load. The second load consisted of our house/barn/garage contents. For the month prior, I had been diligently visiting the dump with a loaded car, getting rid of as much 'stuff' as possible..but we still had so much. It's no wonder I suppose, with a family of five people, six sheep, a goat, dog, and a cat. And in the final week before our move, we (reluctantly) took in 11 unwanted muscovy ducklings as well. There has been much muchness!
In between the first and second truckloads, a kind neighbour came by with a homemade sheep crate on the back of his truck, and we managed to get four sheep plus Talulah (the pygmy goat) in there for the first ride, and the remaining two sheep took the second trip, and they all arrived safely to be happily set up in their lovely new barn (:
There was so much to do in those final days of moving, that Jason and I literally had tears in our eyes on occasion, feeling that there was simply too much to accomplish - We hardly ate or drank, and just kept going and going and going. Thank goodness for the angels who came to help us - My Mom and sister watched the boys and scrubbed the old house for us, packing up odds and ends and keeping things as sane as possible - and on the day when we hauled the firewood, two local friends - who started out as egg customers - happily offered their services. We got those four bush cords out of the truck and neatly stacked in the garage, all hands working together in bucket-brigade fashion. It was actually very lovely, a very positive experience.
Upon returning, we all began loading up the truck with 'everything else'. The four of us worked until 10 that night, and we sent them home feeling VERY grateful for all their help..There was still so much to load, but Jason and I thought we could do it..so we started early the next morning. Hours later, we realized we were pretty much doomed. We were racing against the clock as the sun would set at around 4 or 5 pm..I had to leave in between the loading to get the sheep delivered too. Jason was basically doing it all by himself and it was awful. It started to rain..and then our friends showed up again to help us! It was nothing short of a miracle. They were exhausted and sore from helping us the day before, but they came anyway. They said they knew we were in trouble; They had moved before, just the two of them, and they knew how hard it was and just wanted to help. Can you comprehend how wonderful this was? The four of us worked and worked and worked, and by 10 pm that night had moved everything to our new place. They went home, and we drove back to get the kids - My Mom and sister took our cat to our new house while we dropped the truck off an hour away. While I tucked the kids in (it was so very late), Jason drove back to the old place, gathered any leftover items not accounted for, the dog, and the goldfish, and rolled in about 4 am. He slept the whole next day. We waded through a sea of boxes, everyone cranky because of the exhaustion and mess and chaos..But we got through it! I unpacked those boxes like you wouldn't believe, and within a week our house looked quite nice.
We have celebrated Isabella's 14th birthday, as well as our first Christmas here. We all love our new home, and it is so warm and cozy! The woodstove is amazing! The quiet of the surrounding woods is enchanting, and overall we are just very content and happy (: We are blessed. Life is wonderful! A gift!