Be where you are.

Those words kept playing over and over in my head yesterday. It's good that I listened to them, even if only in retrospect. I customarily power through the day, there being so much to do, and a never-ending list of things that need to be done as soon as one thing gets accomplished.
But yesterday, I was so-so-so tired. That kind of tiredness that has you totally done in..where you feel like a walking zombie as you drag through your moments. I still did everything. I still made the meals, did the laundry, swept the floor, fed and watered the barn animals, cleaned the kitchen, walked the dog in the rain, minded the little ones and prepared a bushel of apples for applesauce. In the end, the applesauce burned and the whole pot was ruined which has never happened to me before, but I suppose that says a lot about my abilities while in such a state.
It's hard to "be where you are" when you have no coherent thoughts or basic mindful attention to your life!
Oh well. I know it won't last forever (:
Right now, Ollie is napping and Jude is watching a short video, even though I feel a bit guilty about that - and I am on the couch under a quilt with a cup of tea. I don't ever do this, but I should, so I am. I rather like it actually!

And totally unrelated, look at this great big fungus we found in the pasture! 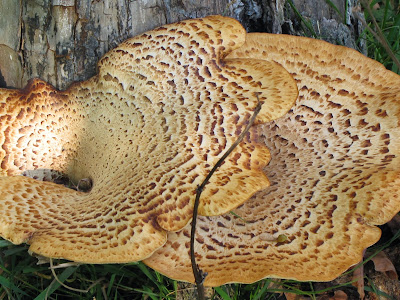