It has been forever since I did a post ~ or put any conscious thought into ~ raw food.
I am really tired with this pregnancy, but I try not to gripe...But really, it's hard work, and I'll tell you why:

1. Jude still wakes up at night and so I don't get any straight sleep.

2. He sometimes wakes up at 3 or 4 am and wants to play for two or three hours, and then he (thankfully) goes back to sleep, but at that point I need to get Isabella up for school. I usually go and lay back down for a couple hours but after such an insane night, I sleep badly and wake feeling like a truck ran over me.

3. This baby is big. I can tell. The midwives can tell. The cashier at the grocery store could tell this afternoon. And after all, it makes sense as Jude was 9 lbs, 12 oz. I have hardly any 'inside room' and so I can only eat little bits of food, which I imagine are not enough to fuel all the tasks my body has to accomplish.

4. I have no energy, ever. I suppose because of the lack of sleep, and then the pregnancy demands on top of that. I find it hard to be fun for Jude, spend any quality time with Bella or Jason, get stuff done, or feel optimistic. I don't know about you, but if I don't get decent sleep for three nights in a row, I start to feel crazy. Seriously, totally crazy, depressed, ornery in the worst way with no patience and I feel like I'm going to die. I know that sounds a bit dramatic but that's the way of it (-;
5. I have a very painful thing called diastasis symphysis pubis that makes it absolutely excruciatingly painful to do just about anything, like stand or sit or walk or lye down or move in any way. I am in pain ALL the time. It sucks. But it goes away once the baby is born, so that's good. I had it with Jude's pregnancy too although it started much earlier this time around. Apparently this baby is in a posterior position, so his head is bonking against my spine and wedged down in my pelvis more than normal, which doesn't help. I have been encouraging him to flip over the right way with a few simple movements and positions and I do hope he will be obliging (-;

Ok, so on to the raw food zucchini noodles...Jason and I share a car, so when he needs to teach at the college I drop him off and visit my sis because she lives really close to there. Last week we hung out and chatted and ate veggies and hummus while Jude played with the remote control jeep that just happens to be at her house. He really loves that thing, probably because he only plays with it when we go over there, which isn't very often at all.

Yesterday we did something infinitely more exciting! We broke out her new spiral - twirley type food cutter and made some raw zucchini noodles! Jude actually did all the work; it was such an easy thing to use. It took like two seconds and they were so yummy! Tash put a mixture of marinara and pesto sauce on top and garnished with grape tomatoes. Awesomeness. And the part that amazed me more than anything else was that Jude LOVED it. He ate more than half of my plate and he is a very picky eater. It's hard to get him to eat vegetables at all. Yay for raw food!

We also treated Jude to a bath, as we only have a shower here, and of course he played with the remote control jeep. He had a pretty fun time. 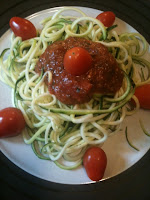 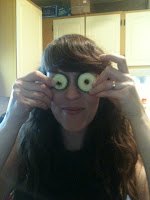 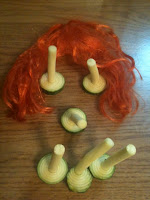 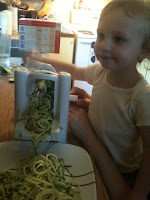