cat hugs and other thoughts (-: 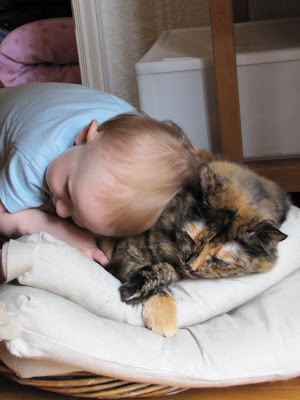 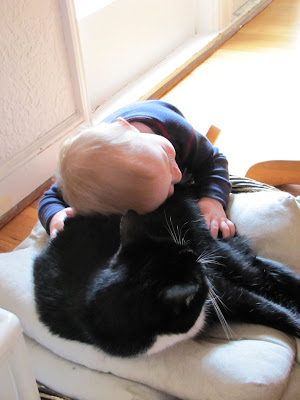 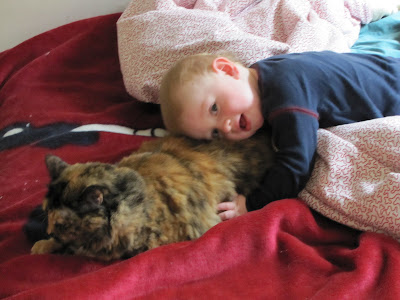 I haven't yet had the pleasure of sharing this ~ Jude's newest favourite thing to do. He loves to hug our cats (-: All three of them (-: They are not the biggest fans but just as long as he isn't pulling their tails or hitting them, they are tolerant of his exuberant embraces. So far I have captured him hugging Lily and Socrates in
photograph form; I have yet to get the picture featuring our cat Blue.. For now Mabel is exempt from the frightening baby-love, safely tucked behind her bunny-wall. Thank goodness, because he is the most facinated by her cute bunny self!
!_!
("^_^")
Now that Jude is nearly 11 months old ~ Tomorrow actually ~ He is quite the character. He is not only hugging the pets, but also giving us hugs, which has got to be the sweetest thing ever (-: He frequently says "Good", which is also the sweetest thing (-: As in, we are walking along, the sun is shining and there is a gentle wind blowing and he looks up at me and says, "Good" with a beautiful smile.  I went to an evening raw food culinary class earlier this week, Jude and Bella having spent the 2 and a half hours together strolling, playing and eventually getting frozen yogurt. When they met me in front of Whole Foods on the way home, Jude started smiling, and then wriggling, and then fussing until Jason removed him from the cozy ergo where he had been nestled all that time and handed him to me. Jude buried his face in my neck and said "Good".
Yes, there were tears in my eyes. You give so much as a mother and rarely do you get such profound feedback (-: So then, besides the cat hugs and first word, Jude is one seriously busy boy. He loves to chase the cats around, Still by shuffling along on his bottom ~ It looks like he'll just skip the actual 'crawling' altogether and go right onto walking, which he has been avidly practicing using chairs, the laundry hamper, the bed, high chair and couch for a support! He has a great sense of humour and the cutest little giggle, which can be ignited with neck-tickles, watching our cat Blue chase a laser pointer dot, or tummy and back gobble-gobbles (-: I cannot believe that in just one month he will be a whole year old. Time passes so quickly and I am so grateful for this most cherished gift ~ this opportunity to be home with him for his sacred babyhood (-: Did I mention that he is a bit saucy as well, pulling out the phone jack, trying to get into the garbage, pulling all the books off the shelves and of course attempting to unroll all the toilet paper...He does keep me busy...but I just get all mushy when he smiles at me; It is the cutest thing imaginable (-:
Here is a list of his favourite things:
hugging/chasing cats of course

being outside - especially when there's a breeze

when Jason and Isabella come home

having showers with us

sitting on the earth - in the grass, leaves, dirt or straw (-:

drinking out of a cup

his baby spoons, which he plays with all day

sneaking into the kitchen to grab handfuls of cat food and water!

dancing around the living room

being allowed in Isabella's room

pulling things off of tables

squealing with delight at the sight of our cats

saying "Dah?" or "Dat?" while pointing at things

giving us toys to eat (-:
That's pretty good for now! Jude ~ poor little guy ~ has a cold and so he's feeling pretty rotten. He was up a lot last night crying because he was feeling badly )-:  And he has just awakened from a ten-minute nap, which is pretty much completely ineffective, so I think I'll strap on the ergo and take him for a nice walk outside. I have my Mom's voice in my head saying "Go to the out-of-doors, Take yourself outside" which is what she always said to us when we were sick. She believed that nature is our greatest healer. So I will be a good daughter and mother and do that (-: Posted by Samantha Tara at 9:13 AM